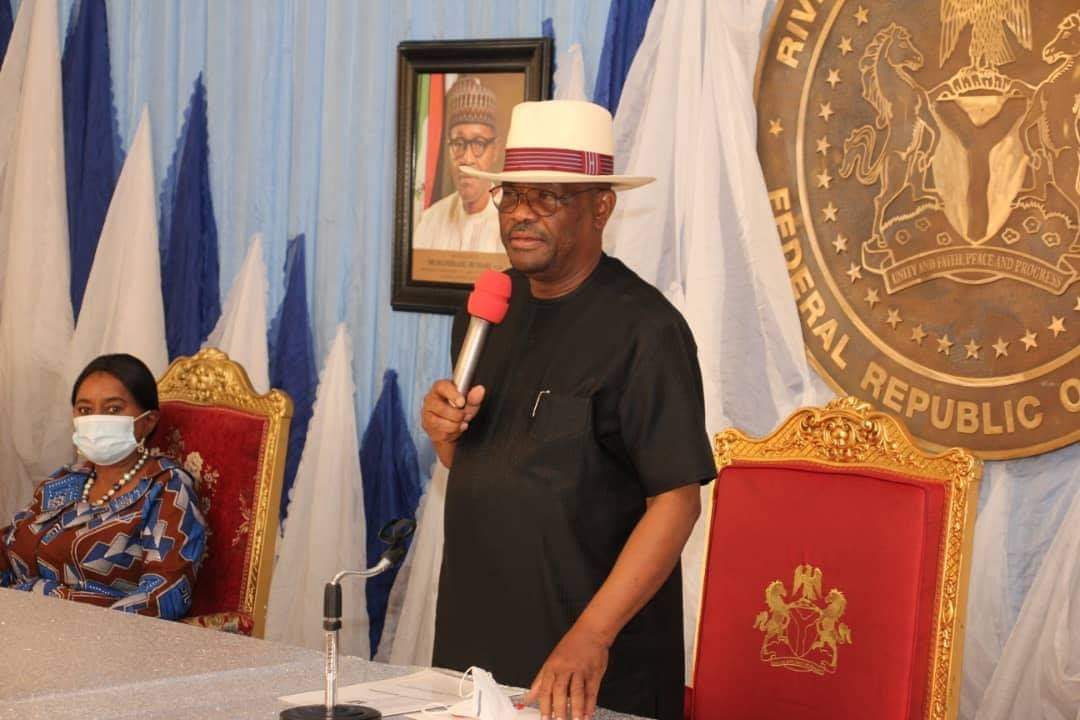 Governor Nyesom Wike of Rivers State on Monday noted that operation by security operatives in the Oyibo Local Government Area is against members of the Indigenous People of Biafra, IPOB and not the Igbo.

He noted that he does not regret waging war against the outlawed group.

Wike, however, stayed disclosed that he did not order military member and police operatives to kill any igbo in the state.

The Rivers State Governor in an interview noted that the allegation by the leader of IPOB, Nnamdi Kanu, that soldiers killed 100 people following his instruction is a lie.

Wike in his statement described the actions of IPOB as unfortunate. He lamented that the outlawed group had tried many times to use Oyigbo as a base for their operations.

He added that #EndSARS protest was going on peacefully until IPOB members hijacked it and unleashed violence that resulted in the destruction of properties.

Governor Wike stated that his government would not allow IPOB take over any part of the state.

He condemned a minister for sponsoring propaganda that he ordered the military to kill the Igbo in the state.

He said, “This is not the first time IPOB has used Oyigbo as a launching ground, security is aware, IPOB has been doing that. How could it have been #EndSARS movement?”

“The country knows that if there is one man that is not liked by the military, it is me, because I will speak my mind against them.”

“I don’t know when I became a friend now to order the military to go to Oyigbo to start killing people. It is very funny. That is why I said that somebody is trying to sponsor propaganda against me that I am killing the Igbo and I laugh.”

He insisted that his government would not allow IPOB to realise its wish of taking over any part of Rivers and blasted “somebody” he referred to as minister for sponsoring propaganda that he ordered the military to kill the Igbo in the state.

The governor wondered why IPOB would cause havoc in the state and denounced its members for attempting to claim and rename some communities and local government areas in the state.

He said: “Why will IPOB use a local government to begin to launch attack not only on properties, but on innocent Nigerians and the security operatives. Rivers State was peaceful, IPOB woke up in the morning that they were doing EndSARS protest and killed six Army operatives and burnt one. Killed four police officers, destroyed all the police stations in Oyigbo. Burnt down all the courts.”

“And you know that when you kill a security personnel, they will be angry and they will never let you go.”

“I don’t need to call the army. I don’t have a relationship with them and I don’t have the powers. I have no access to them. Even when the former GOC was here, he never saw me for one day till the day he left here.’

“IPOB tried to rename communities through their so-called leader Nnamdi Kanu when I am governor here. They start to change the names of communities and local governments in my own state, when I am governor. They went there to hoist flags like Boko Haram in the Northeast, and you said we should allow that.”

“The security agencies got there and in peoples houses, they saw shrines with IPOB flags and Nnamdi Kanu’s picture. It is so terrible that if you continue to allow these boys to operate from there, before you know it, the state is gone. And not under my watch will I allow that.”

“They went to a school in Kom-Kom; a school we built and hoisted IPOB flag . It is in the course of this whole thing we started finding out. You cannot say as a sitting governor, a body that has been proscribed by court, by law and which you have not set it aside or appealed against it, and the Federal Government has said the body is a terrorist organisation, then as a governor, because of politics I will sit down. I won’t allow that. People saying, I sent the military to Oyigbo to start killing Igbo people, it is balderdash.”

“We must come out heavily against this terrorist organisation. I have no regrets about that. Even the Southeast Governors never supported IPOB. If me I am not from the Southeast, from the Niger Delta, why will I support IPOB? On what basis?”

He noted that he does not hate the Igbo, he added that people of the state always enjoy good relationship with them.

“With due respect, how would I hate Igbos? It is unthinkable, it is impossible. We have lived with the Igbo all our lives in the (defunct) Eastern region and we related very well. We have done everything together.”

“I said to them that I am not (Ike) Ekwerenmadu that you will harass. I am not Amaechi. I dared them. I will not look back on the street of Europe. Nobody can intimidate me on that,” he boasted.

Wike however explained that a security council meeting agreed to form Neighbourhood Watch that will have its operatives trained by the Army, police and DSS(Department of State Services).