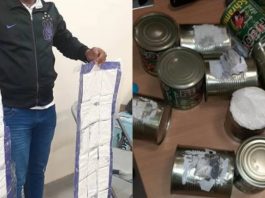 The suspects; Okwubunne Chidiebere Simeon and Aniakar Uchenna James, were on Wednesday, October 28, 2020, arrested on arrival from Sao Paulo, Brazil, with 10.40 kgs and 6.25 kgs of cocaine respectively.

The items were concealed in eight children’s duvets which contained seven absorbent towels. The towels were soaked with cocaine while the remaining drugs were neatly and cleverly concealed in tin cans labelled Schramn.

With the street value of cocaine worth about N135,000 at per gram, depending on the country, the seizures are worth over N2bn.