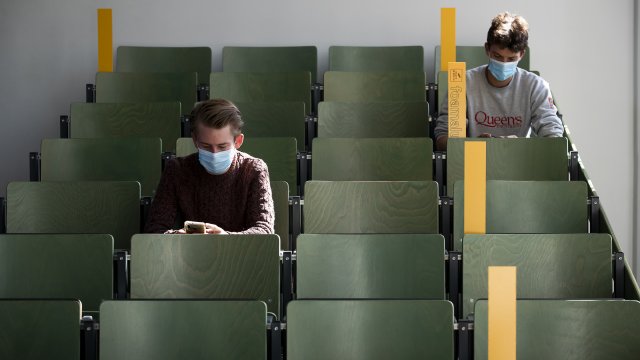 After the universities of Antwerp, Ghent and Hasselt, the University of Leuven (KU Leuven), the Free University of Brussels (VUB) and the Thomas More university college will also switch to code orange from Monday.

The universities of Leuven and Brussels and the Thomas More university college chose to start the academic year in code yellow, but will now switch to orange on all their campuses and teaching sites due to the increasing number of infections.

“We had hoped [to stay in code yellow] for five weeks, to finish a really good introduction. But it is what it is, and we really need to switch gears now,” Leuven Rector Luc Sels said. “The virus is spreading faster and faster all over the country.”

The university has a “clear impact” on the cities in which they are present, especially the large campuses, Sels said.

The same goes for the VUB, according to Brussels vice-rector Jan Danckaert. “We are concerned about the rapidly increasing number of infections throughout the country, and in Brussels in particular,” he said. “Certainly the situation in the Brussels hospitals worries us.”

Even though everything is organised in a safe manner on VUB’s campuses, by organising classes on-site, students still have to come to campus, including while using public transport. “That is not without risk. With code orange, we reduce this potential exposure,” Danckaert said.

Code orange significantly reduces the number of students on campuses. In university auditoriums, only one in five places can be occupied if everyone wears a face mask, for example. For lessons in a smaller group, with a face mask, it can be one in two places.

In the university colleges, as well, a maximum of 1 in 5 students may be present on campus.

The adapted way of working will apply from Monday, for tens of thousands of students from KU Leuven, the VUB and a number of associated universities of applied sciences.

Unlike the lockdown in March, however, KU Leuven rector Sels pointed out that not everything will be digital. “We will continue with our practical exercises, lab exercises, and exercises in the PC classrooms as we have done in recent weeks,” he said.

In Brussels, courses have the freedom to organise all their lectures online, said Danckaert. “As of 26 October, we have asked all courses to be ready for code red. We are waiting for further confirmation from the government.”