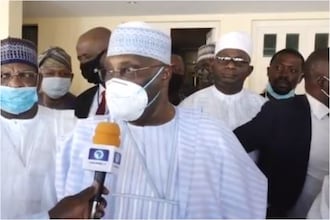 Men of the Nigeria police have been lambasted for attacking unarmed protesters with gun during peaceful protest.

A former presidential candidates, Atiku Abubakar has lashed out at the police for attacking #EndSARS protesters.

He queried the FG government for allowing police to attack peaceful protesters with guns.

According to him, it is wrong for the police to face unarmed citizens with guns during peasful protest.

“I stand with you all as you peacefully protest to #EndPoliceBrutality and enthrone a new policing order that underscores interest of the citizens.

Nigerians should be provided with a non-toxic environment for #EndSARSProtests. It is their constitutional right and an ingredient of democracy. They deserve to be heard and not killed or maimed.”