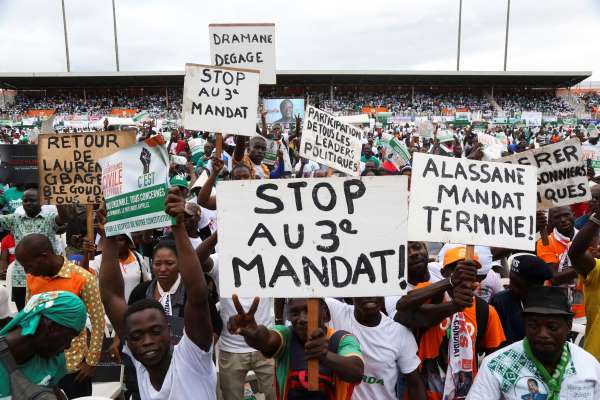 Thousands of opposition supporters rallied in the Ivory Coast’s commercial capital on Saturday to protest against President Alassane Ouattara’s plan to seek a third term in the Oct. 31 presidential election.

By early afternoon around 20,000 people had packed a 35,000 capacity stadium in Abidjan, chanting and dancing. Some held banners saying “The people say no to an illegal third term.”

Ouattara announced in August that he will seek another term following the sudden death of his handpicked successor.

The constitutional council has cleared him and three other candidates to run, but the opposition says Ouattara is violating the constitution by seeking another term and has called for a civil disobedience campaign.

The 78-year-old president, in power for a decade, says a 2016 constitutional change means his two-term limit has been reset.

Over a dozen people have been killed in violent protests, sparking memories of 2010-11, when 3,000 people died in the civil war following a disputed election that Ouattara won. Ivory Coast is the world’s top cocoa producing nation.

“My advice to President Ouattara is that Ivorians should sit down to discuss. We want peace. We don’t want war,” Eve Botti, a supporter of the FPI opposition party, told Reuters at the rally.

Sie Coulibaly, a supporter of former rebel leader Guillaume Soro, whose candidacy was rejected, said he came to the rally to say no to Ouattara’s third term. Soro is in exile in France.

The opposition has called for the election to be postponed, but have stopped short of saying they will boycott the poll, while the ruling party has said the election will take place regardless of whether they participate.