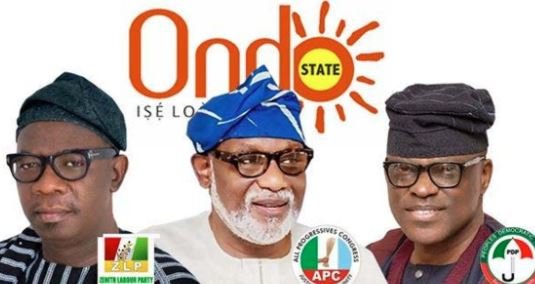 NO fewer than 1,478,460 voters will decide tomorrow’s governorship election in 203 electoral wards across 18 local government councils in Ondo State.

Although 17 candidates are eying the Alagbaka Government House, Akure, the state capital, eyes are only on three standard bearers.

On poll day, the remaining 14 candidates running on the platforms of mushroom parties will pale into dignified spectators. Some of them have been endorsing either Akeredolu or Jegede.

The analysis of Permanent Voter Cards (PVC) collection across the councils shows voters’ enthusiasm. The 1,478, 460 cards collected represent 81 per cent of the 1,822, 346 total voter population.

There are 343, 886 uncollected PVCs, representing 19.9 per cent of the total registered voters.

Akure South, which comprise of Akure city, has the highest number of PVC collection put at 207, 238. The lowest is Akoko Southeast, which has 32, 763.

Yesterday, the umpire begun the distribution of sensitive materials.

But the PDP rejected the appointment of the Obafemi Awolowo University ( OAU) Vice Chancellor Prof. Eyitope Ogunbodede as Chief Returning Officer, saying he may not be neutral.

The Chairman of PDP Campaign Council, Oyo State Governor Seyi Makinde, said Ogunbodede, who hails from Owo, is a crony of the governor.

The APC, in a statement by its Deputy National Secretary, Yekini Nabena, urged security agents to protect voters from violence threats by the PDP and ZLP.

He said the threats were aimed at causing voter apathy since they know that Akeredolu enjoyed popular support because of his unprecedented achievements.

Nabena, who listed 10 reasons why the governor deserved a second term, said his unparalleled and multi-sector achievements, cross-partisan support and widespread acceptance by the people has led to defections from the PDP and ZLP to the APC.

Flaying the the oppositions parties for planning violence, he said their plots will fail as the will of the people will prevail.

“Within three and half years, the Akeredolu administration has taken Ondo state from zero to eight functional industries; worked on over 403 kilometers of roads; renovated 660 schools; rehabilitated 1928 rehabilitated boreholes providing portable water; generated over N2.2 billion internal revenue, representing 300 percent improvement from previous administration; cleared seven months salary backlog owed workers by his predecessor; upgraded the state’s security apparatus which has also benefited the South West zone and neighbouring Niger Delta states; ensured judicious use, probity and accountability of the state’s resources and ensured even spread in the allocation of state resources and projects.”