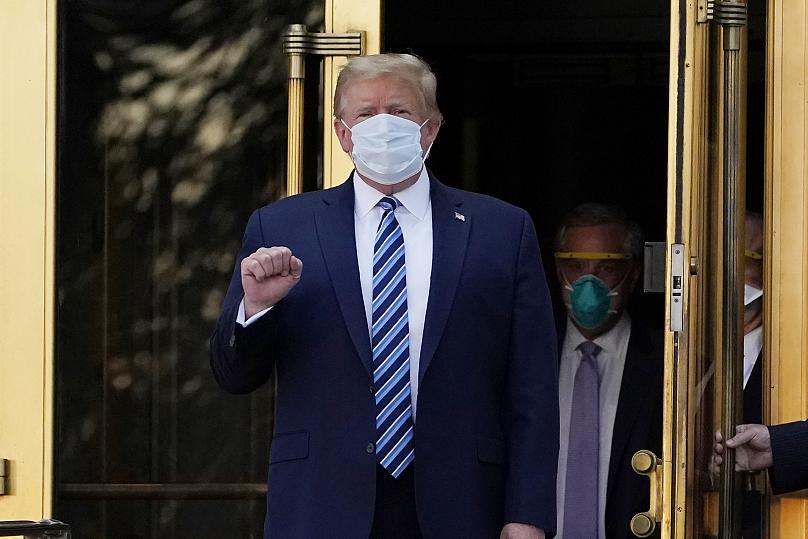 Donald Trump has returned to the White House to continue his treatment for COVID-19, telling supporters they should not feel afraid as he appeared to downplay the illness.

The US president’s dramatic return was captured on film as he left Walter Reed Military Medical Centre on Monday following a three-night stay, before boarding a helicopter that transported him to the White House.

Standing on a flag-decked Truman Balcony, Trump removed his mask for a photo opportunity, when he announced: “I feel good.”

He then turned and re-entered the White House without a face covering, and where staff could be seen walking around.

In a later video, Trump told the country: “Don’t let it dominate you. Don’t be afraid of it,” as he played down the virus that has infected more than 7 million Americans; killing 210,000 of them.

The president’s doctors confirmed on Sunday that he had been administered with experimental drug remdesivir along with dexamethasone — a steroid often used to treat patients with a serious bout of COVID-19.

He is now returning to the White House to continue his course of remdesivir with round-the-clock care from a team of personal physicians.

“I stood out front. I led. Nobody that’s a leader would do what I did. And I know there’s a risk, there’s a danger, but that’s OK. And now I’m better and maybe I’m a immune – I don’t know!

Trump then promised vaccines were “all getting approved” and were “coming momentarily,” despite claims from pharmaceutical giants of otherwise.

Moderna Therapeutics chief executive Stéphane Bancel told the Financial Times last week that it would not be able to apply for emergency authorisation until November 25 at the very earliest.

At 74 years old and with a morbidly obese BMI, Trump is considered to be at a higher risk of developing serious complications from COVID-19.

Therefore, confusion over the timeline of him announcing his diagnosis and the lack of basic medical information being released in briefings has brought further concern into view. His doctor, Navy Commander Sean Conley, revealed that the president’s blood oxygen level had suddenly dropped twice in the last few days.

However, upon his departure from Walter Reed on Monday, Conley confirmed the president was still infectious and would not be “out of the woods” for another week.

He said, despite this, Trump had met or exceeded the standards for discharge from hospital.

Many have criticised Trump’s efforts to minimise the effects of the virus, with weeks to go before the presidential election.

“We have to be realistic in this: COVID is a complete threat to the American population,” Dr David Nace, from the University of Pittsburgh Medical Centre, said in response to Trump’s comment on not fearing COVID-19.

“Most of the people aren’t so lucky as the president,” with an in-house medical unit and access to experimental treatments, he added.

“I would go so far as to say that it may precipitate or worsen spread.”

Republican Senator John Cornyn, a prominent Trump supporter, told the Houston Chronicle editorial board he believed the president had “let his guard down” and had created “confusion” about staying safe.

Trump’s apparently lax behaviour has also spread worry among those working at the White House and his inner circles.

This includes some Secret Service agents who expressed concern after Trump took a car trip outside hospital on Sunday to wave to his supporters.

The president, himself, wore a mask for the outing, while agents sat in the front of the vehicle wore masks and other protective gear.

Dr James P Phillips, an attending physician at the hospital, said the trip was one of “insanity” as he warned it could put lives at risk.

“Every single person in the vehicle during that completely unnecessary presidential ‘drive-by’ just now has to be quarantined for 14 days. They might get sick. They may die.”

He added: “For political theatre. Commanded by Trump to put their lives at risk for theatre.”