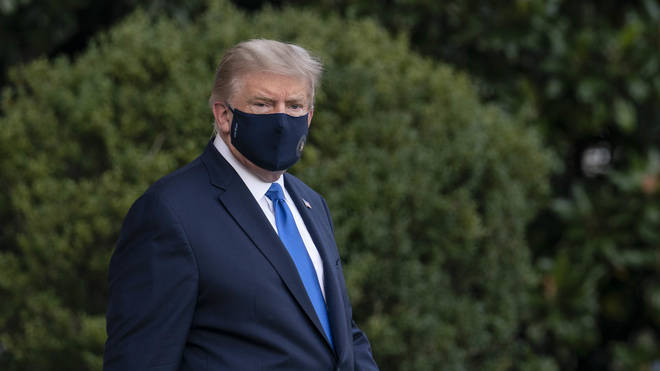 President of the United States Donald Trump is doing well after his positive Covid-19 test, he wrote in a tweet, after he was taken to hospital “as a precaution.’

The day after Trump announced – also via Twitter – that he and his wife were infected with the coronavirus, he was taken to the military Walter Reed hospital by helicopter.

“As a precaution, the President will be hospitalised for a few days,” a statement by the White House said.

“I think I’m doing very well,” Trump said in a video message that he posted on Twitter, in which he announced that he would go to hospital, adding that the First Lady was also doing well. He also thanked everyone for their “tremendous support.”

After arriving at the hospital, around 4:30 AM in Belgian time, Trump again tweeted that he thought he was doing well.

Trump was taken to hospital because his entourage does not want to leave anything to chance, according to VRT’s US correspondent Björn Soenens.

“If his condition were to deteriorate quickly, they would be able to provide him with rapid medical care,” he said, but for the time being, there is nothing to suggest that this is necessary.

According to Belgian intensivist Geert Meyfroidt, Trump “certainly” belongs to the group of patients at risk of getting severely ill.

“For two reasons: his age – he is over 70 – and because of his physique. I understand that his BMI is over 30 and, according to all international figures, that indicates a risk factor for a more severe course of disease,” Meyfroidt told VTM News.

This can manifest itself in the need for oxygen therapy to the need for intensive care, and even ventilation.

The White House, in the meantime, stated that the President is doing very well. “He is not requiring any supplemental oxygen, but in consultation with specialists we have elected to initiate Remdesivir therapy. He has completed his first dose and is resting comfortably.”

The infection comes one month before the presidential elections in the US, and it is still unclear how Trump’s campaign is to proceed, but it is unlikely that the second debate between Trump and his Democratic challenger Joe Biden – who also tested negative – will still take place on Thursday.