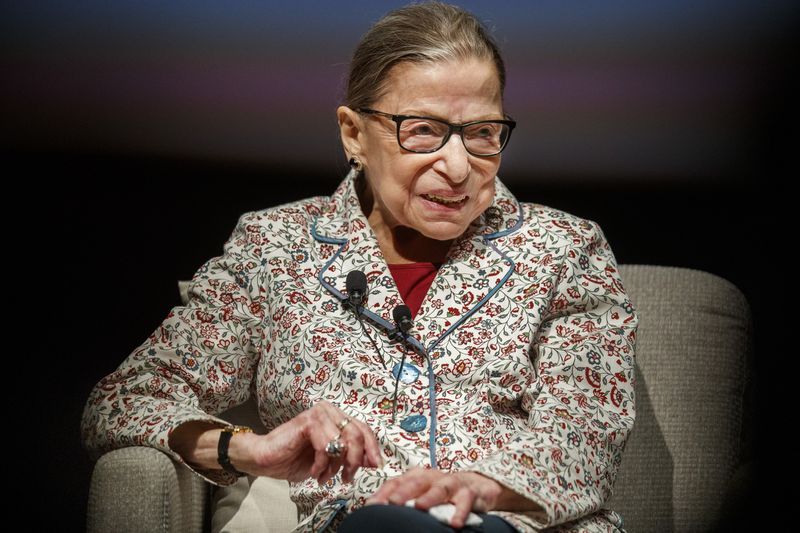 Justice Ruth Bader Ginsburg, a stalwart liberal on the US Supreme Court since 1993, died on Friday at age 87, the court said, giving President Donald Trump a chance to expand its conservative majority with a third appointment at a time of deep divisions in America with a presidential election looming.

Ginsburg, a champion of women’s rights who became an icon for American liberals, died at her home in Washington of complications from metastatic pancreatic cancer, the court said in a statement. She was surrounded by her family, the court said.

Her death just over six weeks before Election Day is likely to set off a heated battle over whether President Donald Trump should nominate, and the Republican-led Senate should confirm, her replacement, or if the seat should remain vacant until the outcome of his race against Democrat Joe Biden is known. Majority Leader Mitch McConnell said late Friday that the Senate will vote on Trump’s pick to replace Ginsburg, even though it’s an election year.

The Senate and the nation mourn the passing of Justice Ruth Bader Ginsburg and the conclusion of her extraordinary American life.

Trump called Ginsburg an “amazing woman” and did not mention filling her vacant Supreme Court seat when he spoke to reporters following a rally in Bemidji, Minnesota. The White House said in a statement that the flag was at half-staff in the justice’s honor.

Biden called Ginsburg an “American hero” on Twitter and told reporters, “The voters should pick the president, and the president should pick the justice for the Senate to consider”. He made the comment after McConnell said the chamber would vote on a potential Trump nominee.

“Our Nation has lost a jurist of historic stature,” Roberts said in a statement. “We at the Supreme Court have lost a cherished colleague. Today we mourn, but with confidence that future generations will remember Ruth Bader Ginsburg as we knew her — a tireless and resolute champion of justice.”

Supreme Court justices, who receive lifetime appointments, play an enormous role in shaping US policies on hot-button issues like abortion, LGBT rights, gun rights, religious liberty, the death penalty and presidential powers. For example, the court in 1973 legalized abortion nationwide — a decision that some conservatives are eager to overturn — and in 2015 allowed same-sex marriage across the United States.

Ginsburg, who rose from a working class upbringing in New York City’s borough of Brooklyn and prevailed over systematic sexism in the legal ranks to become one of America’s best-known jurists, was appointed to the Supreme Court by Democratic President Bill Clinton in 1993. She provided key votes in landmark rulings securing equal rights for women, expanding gay rights and safeguarding abortion rights.

Ginsburg was the oldest member of the court and the second-longest serving among its current justices behind Clarence Thomas. She was the second woman ever named to the court, after Justice Sandra Day O’Connor was appointed 12 years earlier.

The Senate confirmation battle over a Trump nominee to replace Ginsburg is likely to be fierce — at a time of social unrest in the United States during the coronavirus pandemic — though Democrats lack the votes to block him unless some Republican senators join them.

Trump on Sept. 9 unveiled a list of potential nominees to fill any future Supreme Court vacancies in a move aimed at bolstering support among conservative voters.

One of the first fights will be whether the Senate should confirm a new justice until election, less than two months away, is decided.

National Public Radio reported on Friday that Ginsburg before her death dictated a statement to her granddaughter Clara Spera, saying, “My most fervent wish is that I will not be replaced until a new president is installed.”

When conservative Justice Antonin Scalia died in February 2016, Senate Majority Leader McConnell refused to allow the Senate to consider Democratic President Barack Obama’s nominee to fill the vacancy, Merrick Garland, in an action with little precedent in U.S. history. While McConnell in 2016 said a Supreme Court nomination should not be taken up during an election year, in 2019 he made clear that the Senate would allow Trump, a fellow Republican, to fill an election-year vacancy, drawing Democratic accusations of hypocrisy.

On Twitter, US Senate Democratic leader Chuck Schumer said, “The American people should have a voice in the selection of their next Supreme Court Justice. Therefore, this vacancy should not be filled until we have a new president.”

The American people should have a voice in the selection of their next Supreme Court Justice. Therefore, this vacancy should not be filled until we have a new president.

The tweet was a direct quote of a statement McConnell made in 2016.

Reached by phone late Friday, Republican Senator Lindsey Graham, the chairman of the Judiciary Committee, declined to disclose any plans. On Twitter, he called Ginsburg “a trailblazer who possessed tremendous passion for her causes.”

It was with great sadness that I learned of the passing of Justice Ginsburg.

Justice Ginsburg was a trailblazer who possessed tremendous passion for her causes. She served with honor and distinction as a member of the Supreme Court.

Trump, who as a presidential candidate in 2016 called on Ginsburg to resign after she criticized him in media interviews, will get a chance to reshape the court like no other president since Ronald Reagan, who made three appointments during his eight years in office in the 1980s, moving the court to the right.

Trump and McConnell have made moving the federal judiciary to the right a top priority. Another Trump appointment would give the Supreme Court a 6-3 conservative majority, meaning that for the liberal justices to prevail in any case they would need to have two of the conservatives join them.

Some liberal activists had urged Ginsburg to step down early in Obama’s second term to allow him to appoint a younger liberal to replace her who could serve decades on the court.

Even with a conservative majority on the court, Trump came out on the losing end of several key rulings in June and July 2020, including decisions rejecting his claim of absolute presidential immunity from criminal investigation. With Conservative Chief Justice John Roberts playing a key role, the court also ruled against Trump in expanding LGBT rights, invalidating a restrictive Louisiana abortion law and blocking him from rescinding an immigration program created by Obama.

During the 2016 campaign, Trump promised to appoint justices who would overturn the 1973 landmark Roe v. Wade ruling legalizing abortion nationwide.

It would take about a month for Trump and Senate Republicans to pick and confirm a replacement, said Daniel Epps, a law professor and former Supreme Court clerk.

“I would be surprised if the president and Senate Republicans don’t try to fill the seat,” said Epps, of Washington University School of Law. “They probably have the votes.”

Trump will likely replace Ginsburg with another woman, Epps, said, and might use the opportunity to rally his base of social conservatives.

A private interment service will be held at Arlington National Cemetery, the court said, but did not specify a date.

(FRANCE 24 with REUTERS and AP)