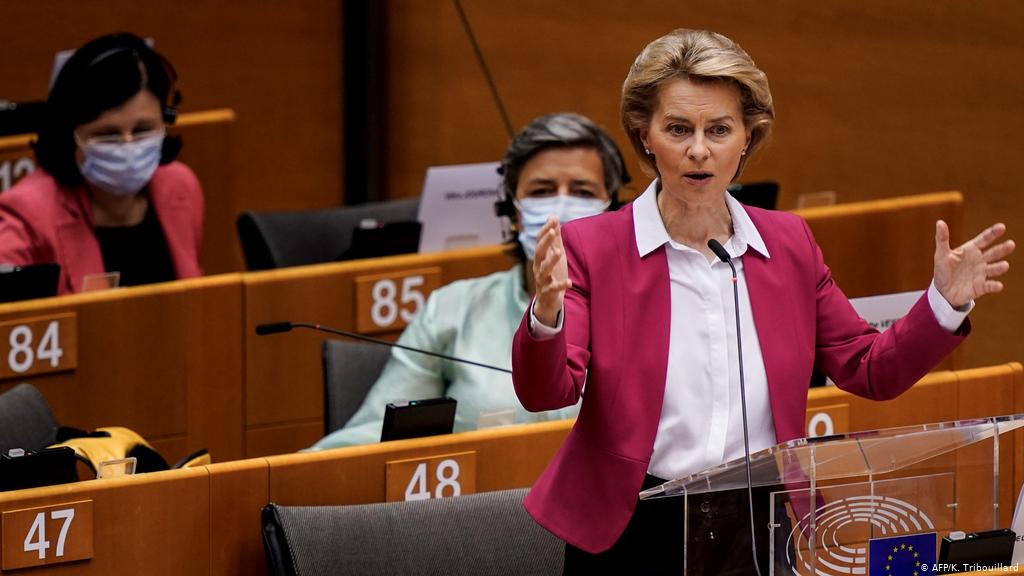 The EU Commission chief painted a sober picture of the bloc grappling with a pandemic and the deepest recession in its history, but laid out ambitious goals to make the 27 nations more resilient for future crises.

Von der Leyen said the EU should set a target to cut its greenhouse gas emissions by at least 55% by 2030, up from a current target of 40%. She said the upgrade would put EU “firmly on track” for its plan to reach net zero emissions by 2050, and that analysis had confirmed a 55% emissions cut was economically possible.

But she acknowledged the proposal would divide the European Parliament and member states, who must approve the legally binding target but who disagree on how ambitious it should be.

“I recognise that this increase from 40 to 55 is too much for some, and not enough for others,” she said in her speech.

The goal will require huge investments in transport, heavy industry and energy — where businesses will also face higher carbon costs under EU plans to revamp its carbon market.

Von der Leyen said 30% of the bloc’s 750 billion euro coronavirus recovery package of grants and loans, which the EU as a whole will borrow, should be raised through green bonds.

‘We turned fear and division into confidence in our union’

The EU has been buffeted for years by crises, from the financial meltdown of 2008 to feuds over migration and the protracted saga of Britain’s exit from the bloc.

Solidarity among the 27 member states frayed badly at the onset of the Covid-19 pandemic and leaders jousted for months over a joint plan to rescue their coronavirus-throttled economies.

But in July they agreed on a stimulus plan that paved the way for the European Commission to raise billions of euros on capital markets on behalf of them all, an unprecedented act of solidarity in almost seven decades of European integration.

On Wednesday, MEPs will hold a purely consultative vote that should allow the Commission to borrow 750 billion euros on the markets for von der Leyen’s “Next Generation EU” plan.

This, for the first time creates, a pool of common debt — shared between EU members, to lower borrowing costs for weaker members — a move that was long opposed by “frugal” northern states.

“In the last months we have rediscovered the value of what we hold in common,” von der Leyen told European lawmakers in her address. “We turned fear and division between member states into confidence in our union.”

She added: “This is the moment for Europe to lead the way from this fragility towards a new vitality.”

She stressed that both the EU and Britain negotiated and ratified their Brexit divorce deal and warned the UK that it “cannot be unilaterally changed, disregarded or dis-applied”.

“This is a matter of law, trust and good faith… Trust is the foundation of any strong partnership,” she said, referring to the UK government’s stated intention to breach elements of the pact.

Von der Leyen also said EU states must be quicker in their foreign policy to support pro-democracy protests in Belarus or to stand up to Russia and Turkey.

“Why are even simple statements on EU values delayed, watered down or held hostage for other motives?” she asked.

“When member states say Europe is too slow, I say to them be courageous and finally move to qualified majority voting,” she said, referring to the frequent blockages caused by the need for unanimity among the EU’s 27 states.