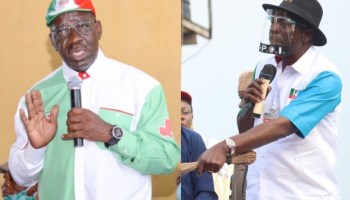 Three polls conducted after Sunday’s debate on the Edo State gubernatorial election have ranked Governor Godwin Obaseki ahead of Osagie Ize-Iyamu of the All Progressives Congress (APC), Special Adviser to Edo State Governor on Media and Communication Strategy, Crusoe Osagie, has said.

He said the polls conducted by independent bodies, after the CHANNELS Television debate put Obaseki, who is a candidate of the Peoples Democratic Party (PDP), ahead of Ize-Iyamu with over 20 per cent margin.

“The polls were conducted by CHANNELS Television, organisers of the debate, Flash Poller, an international pollster and Director-General of the Bureau of Public Service Reforms (BPSR), Dr. Joe Abah.

“According to Flash Poller, the sampled population for the poll scored Obaseki higher than the APC candidate in elocution, presentation, comportment, appreciation of issues, use of rebuttal and argument, factuality, among other rubrics, with an average score of 7 to 3, in favour of the governor.

Osagie pointed out that the international pollster further noted that viewers who were sampled randomly said Obaseki demonstrated a firm understanding of development issues bordering on resource mobilisation, collaboration with development partners such as the World Bank, and his premium on due process, transparency and the rule of law.

See also  Why The 1999 Constitution Must Be Amended – Gbajabiamila

“Some of the respondents, as presented by the pollsters, highlighted Obaseki’s approach to governance, which they said, is in line with best practices and approach to governance in civilised climes, as against Ize-Iyamu’s, who wasted most of his time attacking Obaseki and lost the opportunity to market his SIMPLE Agenda to a global audience,” he added.