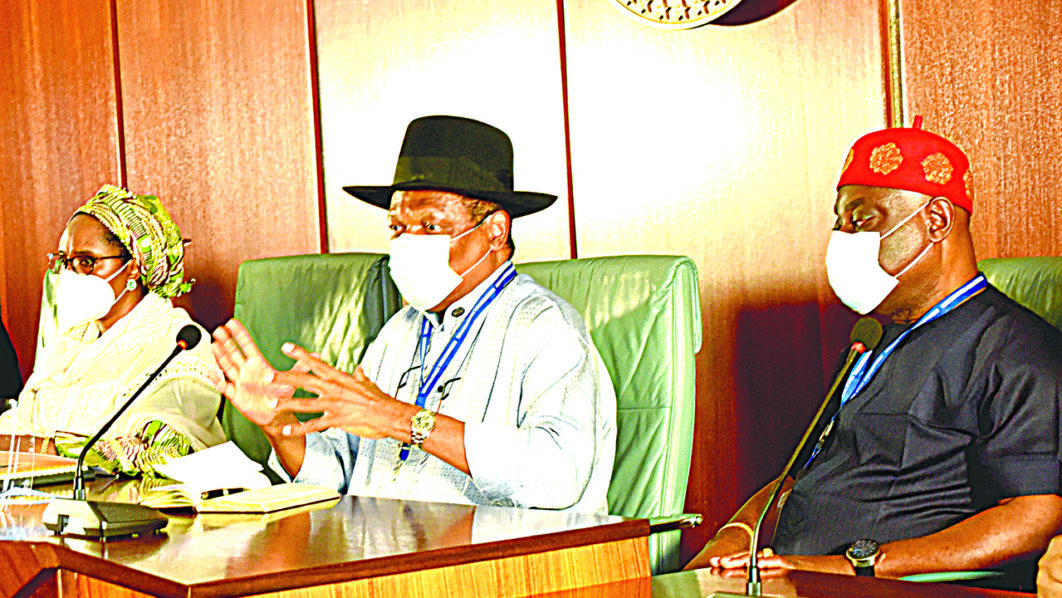 Realising its inability to meet Vision 20:2020 goals years after the country embarked on an ambitious agenda to be among the top 20 economies in terms of GDP size, President Muhammadu Buhari, on Wednesday in Abuja, inaugurated National Steering Committee to oversee and actualise Nigeria Agenda 2050 and Medium-Term National Development Plan (MTNDP).

Evidence before the COVID-19 pandemic showed Vision 20:2020 was far from being a reality; the health crisis only compounded the situation.

Birthed by former President Olusegun Obasanjo, Nigeria’s Vision 20:2020 focuses on two broad objectives that include making efficient use of human and natural resources to achieve rapid economic growth; and to translate the economic growth into equitable social development for all citizens.

Nigeria has had two different administrations since the adoption of Vision 20:2020, each having its own economic growth plan. Under President Jonathan, the Transformation Agenda was the focus. With President Buhari, it is the Economic Recovery and Growth Plan (ERGP) and the focus seems to be squarely on the ERGP as opposed to the Vision 20:2020.

The ERGP is focused on achieving economic growth but without the aim of placing the country among the largest 20 economies in the world.

With Agenda 2050, President Buhari noted that the National Steering Committee for the development of Successor Plans to Vision 20:2020 and ERGP would be jointly chaired by Mr. Atedo Peterside and Dr (Mrs) Zainab Ahmed, the Minister of Finance, Budget and National Planning.

Speaking at the inauguration, President Buhari said: ‘’The main objectives of these Successor Plans are to lift 100 million Nigerians out of poverty within the next 10 years, particularly given the World Bank’s projection that Nigeria will become the world’s third most populous country by 2050 with over 400 million people.’’

The President noted that it had become necessary to develop Successor Plans to the Nigeria Vision 20:2020 and the ERGP, which both lapse in December this year, to ensure continuity and efficiency in the country’s development planning.

On the mandate of the National Steering Committee, President Buhari said it would oversee governance structure, comprising the Central Working Group and 26 technical working groups.

READ  Revealed! Check Out The Last Words Gana Said To His Gang Before He Was Brutally Killed By Soldiers

‘’It is my expectation that the steering committee will oversee the execution of key deliverables, including recommending measures to ensure continuous implementation of the plans even after the expiration of the tenure of successive administrations – including legislation, if required.”

The minister of Finance, Budget, and National Planningexpressed need for the new plans to consider comparative advantages available in regional blocs to build virile Nigeria.

The strategies to achieve the Vision 20:2050 objectives are: Urgently addressing major constraints to Nigeria’s growth and competitiveness, such as epileptic power supply, weak infrastructure, and institutions among others; aggressively pursuing a structural transformation of the economy from mono-product to a diversified and industrialised economy.

Others are to invest in human capital to transform the Nigerian people into active agents for growth and national development; and to invest in infrastructure to create an enabling environment for growth, industrial competitiveness, and sustainable development.

Similarly, the vision projected that the economy is expected to grow at an average rate of 13.8 per cent per annum, to be driven by the agricultural and industrial sectors over the medium-term while the manufacturing and service sectors are expected to drive the economy towards the end of the Vision period, but data from the World Bank showed that economic growth had dropped from 8 per cent in 2009 and 2010 to 2.1 in 2019, with a forecast of 2.2 this year.

Another aim of Vision 2020 was to increase crude oil production and refining capacity “to stimulate local value-addition and to put the country in a position to meet its domestic demand for refined products and even export refined products”. But the country’s crude production remains below its yearly budgetary target, while it has lost hundreds of billions of naira in the past few years as the Federal Government’s promises to revive the nation’s moribund refineries and end fuel imports in 2019 have fallen flat.

Similarly, the Nigeria National Petroleum Corporation, NNPC, last year, assured that it was working with its partners to grow the national reserve to 40 billion barrels by 2025 and improve crude oil production to three million barrels per day.

Data from the Office of Vice President, Prof. Yemi Osinbajo, indicated that in 2019 alone, Nigeria’s privatised power sector lost N626.7b billion revenue due to constraints, which included a shortage of gas; grid unreliability and distribution limitations.

This means Nigerians have continued to depend on alternative sources of energy to power their households despite government reforms, thus, limiting consumers’ disposable income that should have been used for other purposes as well as increased environmental pollution.

In terms of ease of doing business, the vision document further said the government would introduce market-friendly policies to encourage investment as well as decentralise the control of such institutions as the Immigration Service, Nigeria Police, Corporate Affairs Commission, rail, and air transportation management agencies, and so on.

“The government will also reduce the business registration time to a maximum of 48 hours and harmonise all tax systems and payments channels to reduce multiple taxations,” it added.

In 2019, the country ranked 116 out of 141 countries on the Global Competitiveness Index; and in the 2020 Ease of Doing Business Index, it ranked 131 out of 190 countries. The latter report noted that Nigeria had reduced “the time needed to register a company and by improving online platforms” but business registration time is still 10.9 days—not two.

Similarly, the organised private sector has continued to complain about the multiplicity of taxes, over-regulation, and an unfriendly business environment.

As reiterated by the private sector, the outlook of the economy in 2020 is less desired as lingering challenges remain unaddressed.

To the Manufacturers Association of Nigeria (MAN), formulation of laudable policies has never been an issue for Nigeria but evidence has shown that poor policy implementation has been the challenge in the country.

The Lagos Chamber of Commerce and Industry (LCCI) urged the Federal Government to address issues affecting the nation’s potential.