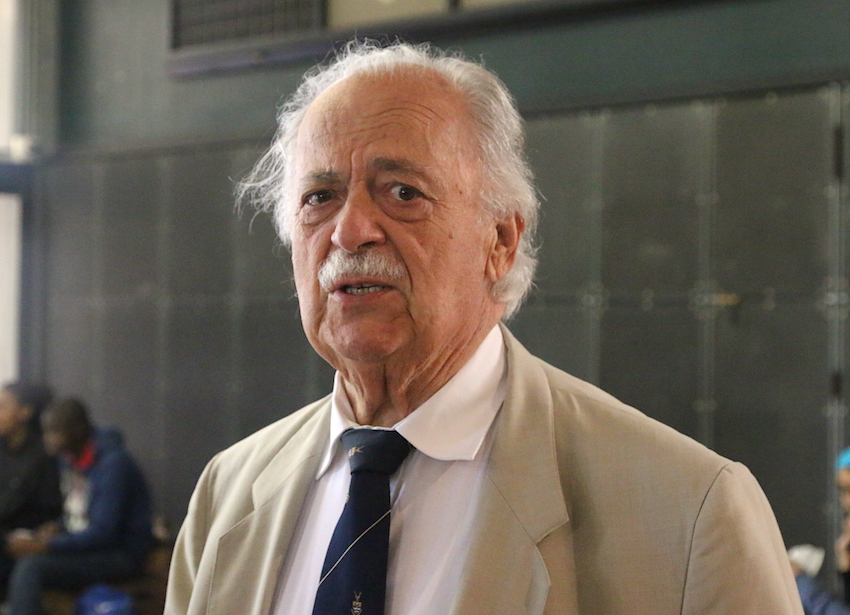 George Bizos, an anti-apartheid icon and renowned human rights lawyer who defended Nelson Mandela on treason charges for which he escaped the death penalty, died on Wednesday aged 92.

“This is very sad for our country,” he said.

Bizos died of natural causes at his Johannesburg, his family said in a statement.

The celebrated lawyer represented Mandela during the Rivonia Trial which saw Mandela and seven others sentenced to life imprisonment in 1964 on charges of seeking to overthrow the racist apartheid government.

Many had expected the death penalty.

Ramaphosa described Bizos as one of the lawyers who “contributed immensely to the attainment of our democracy”.

“He had an incisive legal mind and was one of the architects of our constitution,” the president said.

Bizos arrived in South Africa as a 13-year-old war refugee from Greece and became one of its most respected lawyers.

In a long career dedicated to defending democratic values and human rights, the soft-spoken Bizos represented a series of activists against the white minority regime and later helped to finalise the constitution of post-apartheid South Africa.

A beloved national figure, he continued working into his late 80s. One of his last major trials secured government payouts in 2014 for families of 34 miners shot dead by police at Marikana northwest of Johannesburg two years earlier.

Bizos was in his mid-thirties when he was chosen in 1963 to join a team of advocates that represented Mandela and other leading activists in one of the most important political trials in the history of South Africa.

Although a junior member of the defence team, Bizos was credited with the tactic of proposing that Mandela deliver a statement from the dock to present the group’s cause, rather than submit him to cross-examination.

The speech was electrifying, notably Mandela’s often-cited lines on his hope for democracy: “It is an ideal which I hope to live for and to achieve. But if needs be, it is an ideal for which I am prepared to die.”

Bizos would say later that he advised Mandela to avoid challenging the court over the possibility of a death sentence by adding the tempering words “if needs be”.

In his autobiography “Long Walk to Freedom” (1994), Mandela describes the advocate as a lifelong friend and “a man who combined a sympathetic nature with an incisive mind”.

Bizos continued to represent Mandela throughout his 27-year jail term and also acted for his then wife, Winnie Madikizela-Mandela, on more than 20 occasions.

Bizos and Mandela met as law students at a Johannesburg university in the 1950s and later worked together.

Admitted to the Johannesburg Bar in 1954, Bizos took on cases that challenged the apartheid system, attracting the ire of the government but establishing the track record that led to his joining the Rivonia Trial team.

Among his other high-profile work, Bizos defended the family of Black Consciousness Movement leader Steve Biko, who died in 1977 in police detention, and communist leader Chris Hani, assassinated in 1993.

He was later involved in the Truth and Reconciliation Commission set up to investigate apartheid-era political crimes.

READ  Up to 8,000 Chinese nationals came into US after Trump banned travel due to coronavirus

In 2004 he represented the now late leader of Zimbabwe’s main opposition party, the Movement for Democratic Change’s Morgan Tsvangirai, on a charge of plotting to kill then president Robert Mugabe, for which he was acquitted.

“However oppressive a regime might be, the court is the last forum in which an oppressed person has an opportunity to speak out,” Bizos said in a television interview at the time.

Escape from the Nazis

Bizos arrived in South Africa in 1941, having fled Nazi-occupied Greece with his father, mayor of the Greek village of Vasilitsi where he was born.

His date of birth was not certain. He says in his autobiography “Odyssey to Freedom” (2009), that his father claimed to have forgotten and the Nazis burned the village records.

But his office later said his date of birth was accepted to have been November 14, 1927.

On the run after his father helped a group of New Zealand soldiers escape the occupiers, they went to Egypt and then found a boat to South Africa’s city of Durban.

Penniless and with no English, they moved inland to Johannesburg, and Bizos fell out of education for several years.

After an article on his dramatic story appeared in a local newspaper, Bizos was recognised by a teacher while working in a store. She organised his enrolment in school, a gesture he would always salute.

Bizos married Arethe Daflos in 1954 and they had three sons.