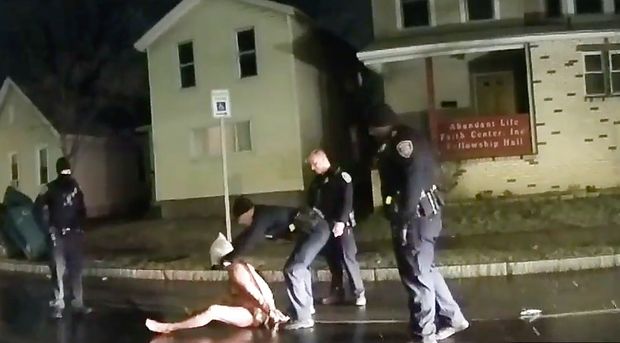 Seven police officers have been suspended over the death of a black man in New York who suffocated after being restrained.

Daniel Prude, 41, died a week after police put a spit hood over his head and held him down for two minutes until he stopped breathing.

He was taken off life support in hospital on March 30.

Seven officers in the city of Rochester, New York, were suspended by the city’s mayor, Lovely Warren, who said she was misled for months about the circumstances of the encounter.

Prude’s death received little public attention at the time, coming at the outbreak of the coronavirus in New York.

The mayor said she only became aware that Prude’s death involved the use of force on August 4.

Initially, she said, Police Chief La’Ron Singletary portrayed the incident as a drug overdose, which is “entirely different” to what Warren said she witnessed in body camera video.

The mayor said she told the chief she was “deeply, personally and professionally disappointed” in his failure to accurately inform her what happened to Prude.

The videos and other records detailed how police had gone looking for Prude after he ran from his brother’s home early on March 23, hours after receiving a mental health evaluation at a hospital.

When police found Prude he was completely naked, on the street in light snow. He lay on the ground as they handcuffed him, then grew agitated, shouting and moving around, demanding that the officers give him a gun.

Officers put a hood over his head because he had been spitting and then pressed his face into the pavement for two minutes, police video shows.

A medical examiner concluded that Prude’s death was a homicide caused by “complications of asphyxia in the setting of physical restraint.” The report lists excited delirium and acute intoxication by phencyclidine, or PCP, as contributing factors.

While denying a cover-up, Warren acknowledged that Prude “was failed by the police department, our mental health care system, our society, and he was failed by me.”

The release of the video footage led further protests in a summer marked by demonstrations over racial justice and police brutality in the United States.

A crowd of protesters gathered late into the night outside Rochester’s police headquarters.

Officers doused some protesters with a chemical spray and repeatedly fired an irritant into the crowd to drive activists away from metal barricades ringing the building.

Protesters protected themselves with umbrellas and dashed for cover.

Journalists were among those hit by pellets during the confrontation, which came on the second day of peaceful demonstrations over Prude’s death.