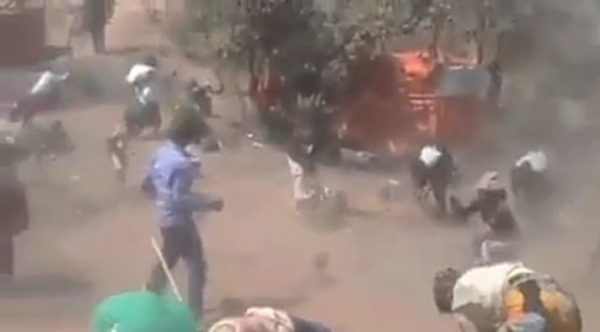 Some religions made us believe that Satan also known as devil is God’s enemy and war must be waged against him to be saved.

This has made it a duty for every believer to battle with the devil and several tactics such as speaking in tongues, dancing, jumping and even rendering supplications on mountains and in wilderness.

As some pastors employ the tactics of kicking to wrestle with evil spirits, a video of some members of a church beating the devil and his demons with sticks has surfaced on social media.

This video among others shows another style or a new dimension church members now employ to battle with the devil and his demons.

Inside the 30-second video which has gone viral, a small crowd mainly women can be seen gathered in an open space hitting the ground with sticks.

Another man presumably the leader or head can be heard urging them to beat harder. Watching the video closely, it is believed that they (church members) are beating the devil and hus cohorts for the ‘calamity they have brought upon the world’.

As at the time of writing this report, the name or location of the church is unknown.