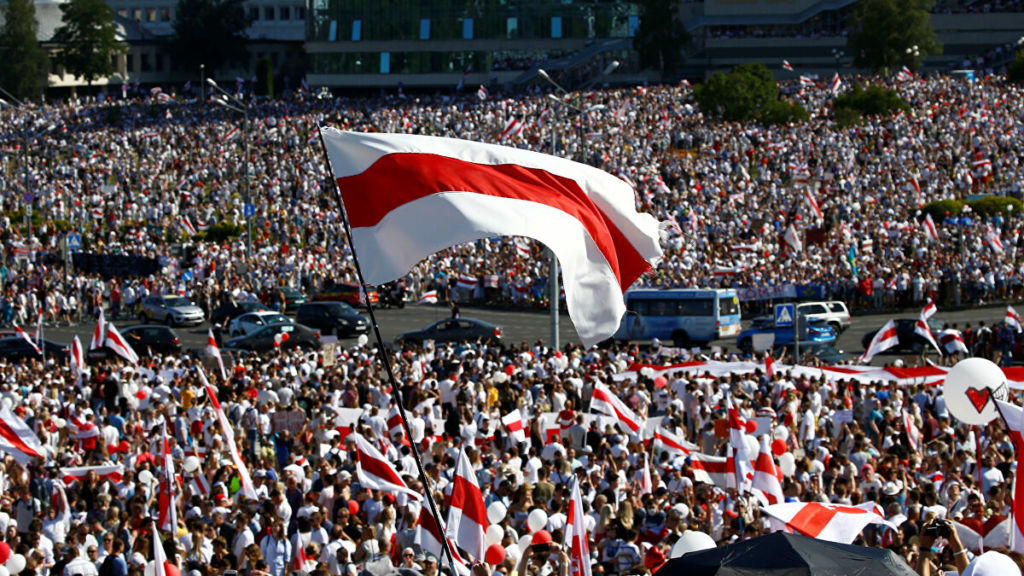 Belarus’ authoritarian leader has threatened to take tough new steps against demonstrators challenging the extension of his 26-year rule and accused the West of fomenting unrest as he sought to consolidate his grip on power amid widening protests.

President Alexander Lukashenko warned on Wednesday that opposition activists who created a council to negotiate a transition and new elections could face criminal charges, and he ordered his security agencies to restore order on the streets — a possible harbinger of a renewed crackdown on peaceful demonstrations.

It comes as EU leaders expressed their full support for the Belarusian people who want a peaceful transition to democracy after ten days of state repression and violence against protesters.

During a meeting on Wednesday, they stressed their concern about the validity of the Belarusian election results and made clear that they intend to increase pressure on those linked to the violent crackdown of protests.

“They want democracy and new presidential elections as these elections were neither fair nor free.”

Supporting the peaceful transition to democracy

Von der Leyen said, “Now it is more important than ever to be there for the Belarus people and to reprogramme money away from the authorities and towards civil society and vulnerable groups.

“There was unanimous support for the EU to be working on sanctions against those responsible for what is taking place.”

“As we increase our support to the people of Belarus, we must be firm with those that rigged the election,” Von der Leyen added.The EU believes that the results of the August 9 polls, which handed President Alexander Lukashenko his sixth term with 80% of the vote, “have been falsified,” and the 27-nation bloc is preparing a list of Belarus officials who could be blacklisted from Europe over their roles.

“Our message is clear. Violence has to stop and a peaceful and inclusive dialogue has to be launched. The leadership of Belarus must reflect the will of the people,” European Council President Charles Michel tweeted, minutes after the summit he is chairing got underway.

Today #EU27 leaders discuss how best to respond to the evolving situation in #Belarus.

Our message is clear. Violence has to stop and a peaceful and inclusive dialogue has to be launched.

The leadership of #Belarus must reflect the will of the people.#EUCO pic.twitter.com/KL1nGXrThj

Dutch Prime Minister Mark Rutte, also tweeted: “The people of Belarus have the right to a result that accurately reflects their vote. The EU, including the Netherlands, can’t accept the results of these elections.”

The people of Belarus have the right to a result that accurately reflects their vote. The EU, including the Netherlands, cannot accept the results of these elections. At the informal meeting of the European Council, I will call for resolute and concerted European action.

In a joint statement, the presidents of the Czech Republic, Hungary, Poland and Slovakia — countries known as the Visegrad Four — called on Belarus authorities to “open the way for a political solution, and to abide by the fundamental human rights and freedoms while refraining from the use of violence against the peaceful demonstrators.”

They urged unnamed “foreign actors to refrain from actions that would undermine Belarus‘ independence and sovereignty.”

In a video statement ahead of the virtual EU summit, Belarusian opposition leader Sviatlana Tsikhanouskaya called on Europe to support “the awakening of Belarus.”

“I call on you not to recognise these fraudulent elections. Lukashenko has lost all the legitimacy in the eyes of our nation and the world,” Tsikhanouskaya said.

On the eve of the meeting, Michel had a half-hour telephone conversation with Russian President Vladimir Putin to share the EU’s concern about election irregularities and the scale of the security crackdown and to impress upon the Russian leader the right of the Belarus people to determine their own future.

They discussed ways to encourage talks between Lukashenko and the opposition, possibly by supporting a dialogue process fostered by the Organization for Security and Cooperation in Europe.

Michel was one of several EU leaders who called on Putin to put pressure on Lukashenko, of whom he is a key ally, to foster dialogue with the opposition protesting for the 10th consecutive day against the presidential election results.

Russia has, in fact, been reacting in an uncharacteristically measured manner as the events in Belarus have unfolded.

Macron called on Putin to “promote appeasement and dialogue” in this country while Merkel stressed that Minsk should “renounce violence” and start a dialogue with the opposition. Michel for his part called for a “peaceful and truly inclusive dialogue”.

The Kremlin has repeatedly warned against “any attempt at foreign interference” and denounced the “pressure” exerted on the Belarusian authorities. According to the Belta news agency, Putin informed Lukashenko by telephone of the content of his conversations with European leaders.

Judy Dempsey, Nonresident Senior Fellow at Carnegie Europe and Editor in Chief of Strategic Europe, said the emphasis from the Europeans appears to be on getting Lukashenko to start talking to an opposition whose legitimacy he has tended to question.

“Time is of the essence,” she warned if Belarusians are not to see their hopes for change hijacked.

“The EU already said it does not recognize the outcome of the presidential election. The idea of new elections would rattle Putin, whose own record on free and fair elections has been challenged — so far unsuccessfully — by protesters in Russia,” Dempsey said.

Speaking to his Security Council, the Belarusian president accused the opposition of seeking to seize power and threatened to “cool some hotheads” from the opposition’s “Coordination Council” for the political transition, which organised a first press conference on Tuesday.

“I want to assure every one of our official position: we will maintain friendly, mutually beneficial, pragmatic relations […] with Russia as well as with Ukraine and the EU countries,” she said. during the press conference.

“We are only beginning to feel like an independent nation,” she continued, adding that the main objective of the opposition is “to organise another honest presidential election.”

Nobel laureate for literature Svetlana Alexievich will be part of the “Coordination Council”, whose first official meeting will take place on Wednesday.

From Lithuania where she took refuge, the opposition candidate Sviatlana Tsikhanouskaya, said in a video statement: “One person has kept the country in fear for 26 years. One person stole the choice from Belarusians.”

Candidate by default after the imprisonment of her husband, the 37-year-old woman had, to everyone’s surprise, gathered crowds of supporters at her rallies and obtained the support of other opponents, succeeding in creating an unprecedented dynamic around her candidacy.

Lithuania another centre of attention

The relatively small EU nation of Lithuania is playing a major role as the protests unfold by giving refuge to Tsikhanouskaya. Its Baltic neighbours, Estonia and Latvia, are also deeply involved in diplomatic efforts, as is Poland.

On Thursday, Lithuania’s Prime Minister Saulius Skvernelis tweeted a picture of himself and Tsikhanouskaya, officially welcoming her and expressing his country’s support for the Belarusian protesters.

Welcomed #Belarus national leader Sviatlana Tsikhanouskaya, reassured her that 🇱🇹 and our closest partners follow the situation closely, support the people of Belarus in their plight for democracy, free and fair elections. Hope she and her family will be able to reunite soon. pic.twitter.com/MJfGmdkRAb

Some in Europe are concerned that hitting Lukashenko and his associates too hard might drive Belarus into the arms of Russia, even though relations between Minsk and Moscow have been troubled in recent years and even tenser in the run-up to the polls. Others fear Russian intervention.

Ekaterina Pierson-Lyzhina, a Brussels-based researcher into Belarus’ EU foreign policy, said that recent surveys suggest around 60% of people want the country to remain independent and reject any kind of union. Smaller groups are divided up into those who support European or Russian integration.

“There are no European flags, no Russian flags. This revolution is about domestic dissatisfaction of the majority of Belarusians with their president, who has held a grip on power for 26 years,” she said and urged the EU to set up a fund for victims of the crackdown and help build a database on police crimes.

In the evening, several thousand demonstrators gathered again in Independence Square in Minsk, waving the red and white flags of the opposition and calling for the resignation of Lukashenko, who claims to have won 80 % of votes in the August 9 ballot — a result, the EU says, it doesn’t accept.

After the election, police forcibly put down protests in subsequent days, killing at least two and injuring dozens. More than 6,700 people were arrested.

On Wednesday, Belarusian authorities on Wednesday the death of a demonstrator, who, according to his relatives, had been shot by police during protests last week.

The Ministry of Health confirmed the death in a statement, not mentioning the cause of his injuries.

According to his relatives and sources quoted by the Belarusian media, the demonstrator was shot in the head on August 11 in Brest (west).

On Sunday, the opposition organized one of the largest rallies in Belarusian history and called for a strike. Several companies followed the call.

The first Belarusian diplomat to publicly support the demonstrators, the ambassador to Slovakia Igor Lechtchenia, for his part, announced his resignation.