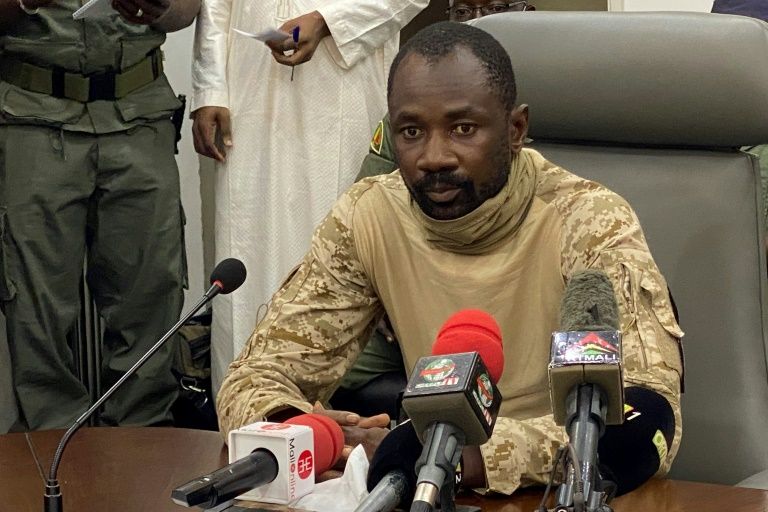 Army colonel Assimi Goita on Wednesday introduced himself as Mali’s new military strongman a day after a coup that was condemned by the international community but won support from the country’s opposition.

In the Malian capital Bamako, Goita said after meeting top civil servants that he was the leader of the “National Committee for the Salvation of the People” that has seized power.

“Mali is in a situation of socio-political crisis. There is no more room for mistakes,” Goita, surrounded by armed military men, told journalists.

His entourage told AFP that Goita, who is in his forties, had until now headed Mali’s special forces based in the centre of the west African country, torn for the last five years by jihadist and sectarian violence.

Several military men told AFP on condition of anonymity that Goita was the true force behind the coup.

Fellow coup chiefs meanwhile called on the public to return to normal life, warned against acts of “vandalism” and threatened to punish any soldier found guilty of extortion.

The opposition coalition M5-RFP said in a statement that “it took note of the commitment” the junta has made to “open a civilian political transition” and would work with it on “developing a roadmap”.

The coalition’s Choguel Maiga told journalists “we will organise the biggest patriotic rally on Friday” in Bamako and nationwide in order to “celebrate the Malian people’s victory”.

The dramatic events in one of Africa’s most volatile countries began early Tuesday, when rebel officers mutinied at a base near Bamako and headed into the city, where they detained Keita and Cisse.

He said he had been given no other choice but to quit, and sought to avoid bloodshed.

Jubilant crowds had cheered the rebels on Tuesday as they arrived in the capital Bamako.

There were few visible traces of those events on Bamako’s streets on Wednesday – troops had not been deployed en masse despite the coup leaders announcing a night-time curfew.

The 55-nation AU blasted the “unconstitutional change of government” in Mali.

The bloc announced that it was suspending Mali – a rare move that bars a member from attending all summits and meetings – “until restoration of constitutional order”.

It also called for the release of Keita and other officials, a demand also made forcefully by Brussels and Washington.

US Secretary of State Mike Pompeo said the United States “strongly condemns the August 18 mutiny in Mali as we would condemn any forcible seizure of power”.

“The freedom and safety of detained government officials and their families must be ensured,” he said.

The 15-nation West African bloc ECOWAS, which had tried in vain to mediate in the long-running political crisis, also said it would suspend Mali from its internal decision-making bodies.

It pledged to close land and air borders to Mali and push for sanctions against “all the putschists and their partners and collaborators”.

ECOWAS said its leaders will meet on Thursday via video conference to discuss the coup.

The coup leaders had appeared on television overnight to pledge a political transition and new elections within a “reasonable time”.

In a brief media appearance, junta spokesman and Air Force deputy chief of staff Ismael Wague called on Malians to “resume their activities in a healthy manner”.

Civil servants were “invited” to return to work on Thursday, he said.

He added that no people had died during the coup, despite unconfirmed reports of several deaths.

With Mali the cornerstone of French-led efforts to roll back jihadists in the Sahel, President Emmanuel Macron reiterated Wednesday his call to return to civilian rule.

“The fight against terrorist groups and the defence of democracy and the rule of law are inseparable,” he tweeted.

Macron added that for French forces “to leave is to provoke instability and to weaken our fight. It is not acceptable.”

Wague said “all past agreements” would be respected, including Mali’s support for anti-jihadist missions such as the UN force in Mali (MINUSMA), France’s Barkhane force, the G5 Sahel, and European special-forces initiative Takuba.

Swathes of Mali’s territory are outside of the control of central authorities and years of fighting have failed to halt an Islamist insurgency that has claimed thousands of lives since emerging in 2012.

The failure to roll back the jihadists was a major factor in fuelling frustrations with Keita’s rule, say analysts.

Tensions flared in April after the government held long-delayed parliamentary elections, the results of which are still disputed.