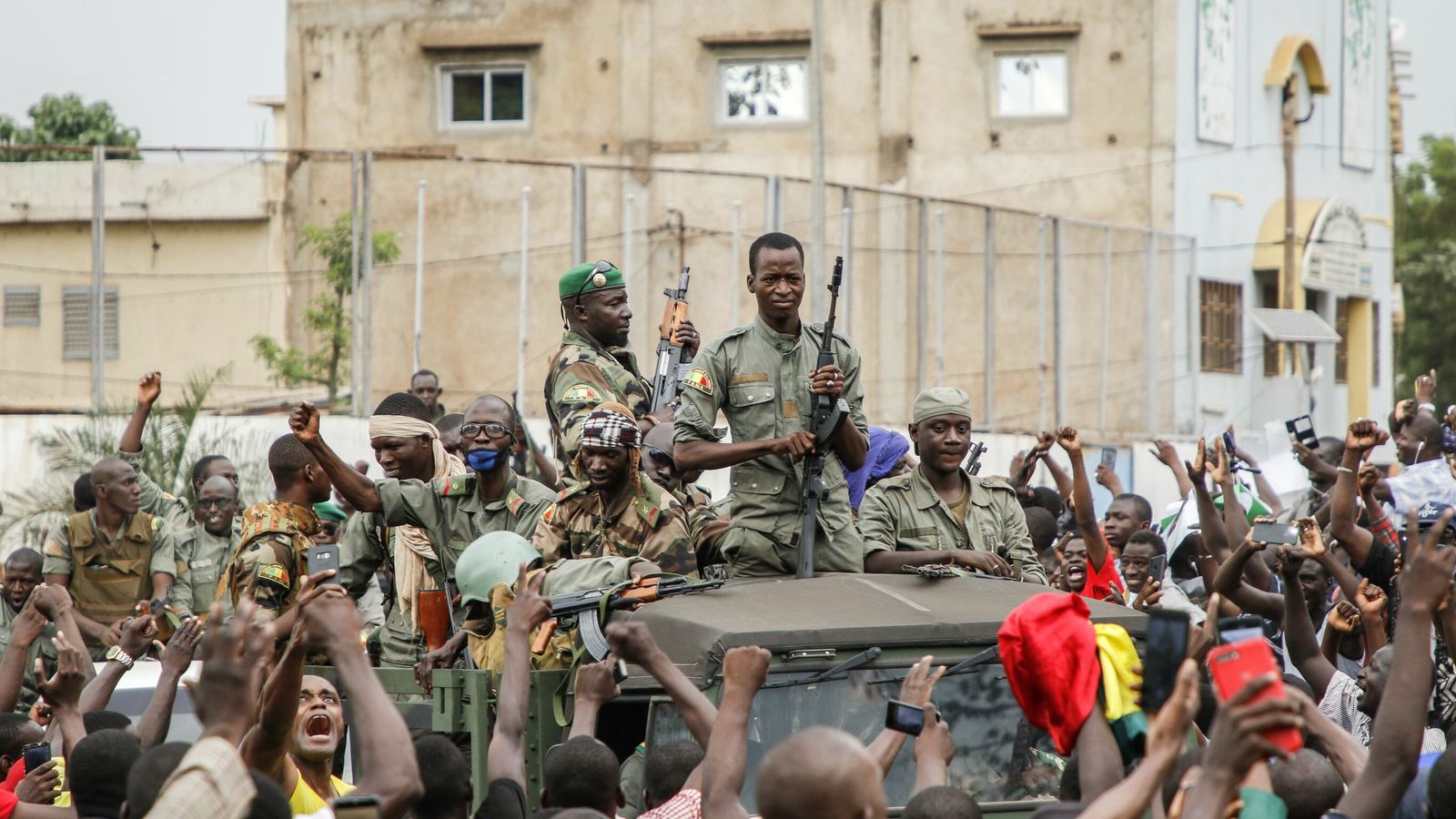 Global leaders condemn the arrests of the country’s leaders and call for their release after months of protests.

The president of Mali, Ibrahim Boubacar Keita, has said he is stepping down and dissolving parliament, hours after soldiers detained him and top officials from his government.

“I want no blood to be spilled to keep me in power,” he said in a brief address broadcast on state television.

Troops had earlier surrounded a residential building, firing into the air, following several months of demonstrations calling for President Keita to be ousted.

Soldiers in the garrison town of Kati also took weapons from a barracks and detained senior military officials.

There was no immediate comment from the soldiers, who hail from the same military barracks where a coup eight years ago started.

A regional official confirmed President Keita and Prime Minister Boubou Cisse had been detained in the West Africa country.

Images on social media showed them in a military convoy surrounded by armed soldiers.

The unrest spread quickly, with hundreds of anti-government protesters on the streets in Bamako, where a building belonging to Mali’s justice minister was set alight.

The prime minister had earlier urged the soldiers to put down their arms, saying in a communique: “There is no problem whose solution cannot be found through dialogue.”

Opposition politicians insist the movement is not a coup, but a “popular insurrection”.

France, the UK and the US have condemned the detention of officials, with a White House representative in Mali saying: “The US is opposed to all unconstitutional changes of government whether in the streets or by security forces.”

The UK’s Africa minister, James Duddridge, said he was “deeply concerned” and the UK “opposes any attempt to unseat the government by force”, as he called for all the politicians to be released and for human rights to be respected.

And the United Nations’ secretary general Antonio Guterres condemned the arrests and called for the immediate release of officials and the restoration of constitutional order and the rule of law in Mali.

Mr Keita has tried to meet the protesters’ demands through a series of concessions since the demonstrations began in June.

The president, who has broad support from its former colonial ruler France and other Western allies, first came to power in 2013 when he won more than 77% of the vote in a democratic election.

A coup in 2012 sparked years of troubles in Mali as the resulting power vacuum exposed the country to Islamic extremists who seized control of towns in the north.

What appeared initially to be a military mutiny, possibly over pay, now seems to be a full-blown coup d’etat.

It’s still too soon to say whether the coup will be successful, but President Keita has been facing protests for months, over corruption, a weak economy and the spread of jihadism.

The unrest in Bamako will have western capitals spooked, especially Paris, its old colonial masters.

Mali sits at the centre of an unstable region – The Sahel – and there are currently around 5,000 French troops in the country fighting Islamic jihadists including al Qaeda and Islamic State, predominantly in the north around the town of Gao.

READ  Tanko Yakassai to Ndigbo: You won’t get presidency in next 20 years if APC wins in 2019

A few hundred British troops are also there, supporting the French with Chinook helicopters.

Reasserting security and stability in Mali is crucial to calming the wider Sahel.

Failure, and Islamist terrorists will try to use it as a new springboard for attacks on the West.