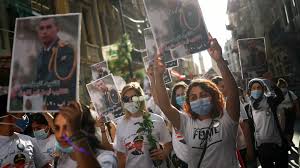 Angry and grieving protesters on Tuesday read aloud the names of at least 171 people killed in last week’s explosion at Beirut port and called for the removal of Lebanon’s president and other officials they blame for the tragedy.

Gathered near “ground zero”, some carried pictures of the victims as a large screen replayed footage of the mushroom cloud that rose over the city on August 4 after highly explosive material stored for years detonated, injuring some 6,000 people and leaving hundreds of thousands homeless.

“HE KNEW” was written across an image of President Michel Aoun on a poster at the protest venue. Underneath, it read: “A government goes, a government comes; we will continue until the president and the parliament speaker are removed.”

The president and prime minister were reportedly warned in July about the warehoused ammonium nitrate, according to documents and senior security sources.

Aoun, who has pledged a swift and transparent investigation, tweeted on Tuesday: “My promise to all the pained Lebanese is that I will not rest until all the facts are known.”

At 6:08pm in Beirut (15:08 GMT) Tuesday, church bells rang and mosques called for prayer to mark the precise moment that a portside fire ignited a vast stock of ammonium nitrate fertiliser, sparking a huge explosion that was felt as far away as Cyprus.

The fireball and subsequent shockwave, caught in dramatic videos posted on social media, wrought devastation across entire neighbourhoods of Beirut.

A week later, the blast that left 6,000 people injured and made an estimated 300,000 people temporarily homeless looked like a potential watershed in Lebanon’s troubled political history.

On Tuesday, Ali Noureddin joined thousands of people to march solemnly by the wreckage of Beirut port, where his brother Ayman had been stationed as soldier when the blast went off.

“My brother died because of state negligence and corruption,” he said, holding a picture of his late brother, who was 27.

Ali dismissed the resignation of Hassan Diab’s government on Monday as insignificant unless it were followed by the wholesale removal of Lebanon’s hereditary political elite.

“Change will only happen when the entire regime changes,” he said, holding back tears. “But I hope all these young people here and my brother’s death can bring about change.”

In his resignation speech, the 61-year-old Diab cast himself as a champion of the struggle against corrupt political overlords, despite the fact many see him as a puppet rather than a victim.

Some saw his departure as a victory for the protest movement that forced out the previous government last year.

But others warned that given the power of Lebanon’s factions and clans, the same old faces may be back before too long.

“It’s a long fight that won’t end in a month or two,” said Hussein El Achi, an activist and lawyer defending the protest camp.

“But (the political elite) are weak, they have never been weaker, even among their own people,” he said.

Protests continued for the fourth consecutive night Tuesday, as dozens of demonstrators clashed with security forces and tried to break down barriers leading to the parliament in central Beirut.

The Lebanese Red Cross said 10 people had been taken to hospital while 32 were treated at the scene.

The blast rocked a country already on its knees, with an economic collapse sending poverty levels soaring even before the coronavirus pandemic hit.

Some observers argue that deep public anger over the tragedy will reduce Lebanese politicians’ room for manoeuvre as foreign pressure grows to pass reforms as a condition for a bailout.

“They will find it very difficult to avoid the kind of structural reforms that the international community has made a precondition for any aid,” said political science professor Bassel Salloukh of the Lebanese American University.

France has taken the lead in the international emergency response, organising an aid conference which raised a quarter of a million euros.

President Emmanuel Macron visited blast-ravaged neighbourhoods of Beirut two days after the disaster, adopting a tough tone with Lebanese officials and warning that they needed to strike “a revamped pact with the Lebanese people”.

For now Diab’s team will continue in a caretaker capacity, but negotiations were underway for a successor.

According to the Al-Akhbar daily newspaper, veteran diplomat Nawaf Salam is favoured by Paris, Washington and Riyadh, three of the key outside power brokers in Lebanon.

Iran, sponsor of Lebanon’s dominant Hezbollah movement, also appeared to be on board with such a scenario, which would see Salam head up a neutral government not hostile to the Shiite group.

It was not clear how other factions viewed that solution.

In the blast zone, the increasingly hopeless search for survivors continued, but rescue teams were only pulling lifeless bodies from the rubble.

The UN refugee agency said that 34 refugees were among the dead.

The blast ripped the sides off towering grain silos that shielded part of the city from the shockwave. But the blast spilt thousands of tonnes of grain, vital to the import-dependant country’s food security.

On Monday, the head of the World Food Programme, David Beasley, said Lebanon needed all the help it could get because 85 percent of Lebanon’s food used to come in through the port.

He warned that unless port operations resumed quickly, Lebanon would be without bread in two weeks.

Further adding to its woes, the country on Tuesday recorded its highest-yet daily number of deaths and new infections from the novel coronavirus, with seven fatalities and 309 new cases.

Health officials have warned that the chaos caused by the blast risked leading to a spike in infections.

The head a major public hospital warned that the next few days would be critical.

“The events of the previous week have, understandably, shifted attention away from the pandemic,” Firass Abiad said on social media.

But, he said, “we cannot afford to allow the virus to go unchecked.”