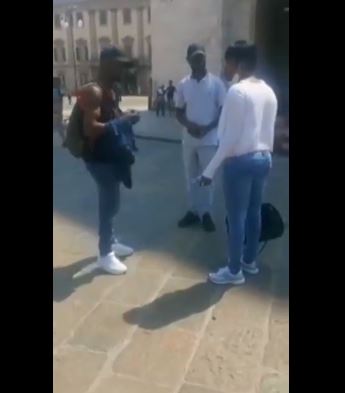 A dramatic incident has played out in public after a man caught his girlfriend with another man.

A Nigerian man has caused a scene after he found out his Nigerian girlfriend, Lucia was cheating on him.

It was gathered that the man had confronted his girlfriend in public after spotting her with another man.

The man explained that his girlfriend had told him that she was travelling to Rome to visit her sick brother. According to him, he had even called her earlier after she left his house but ended up seeing her with another man on the street. Lucia denied him claiming she has not met him before.