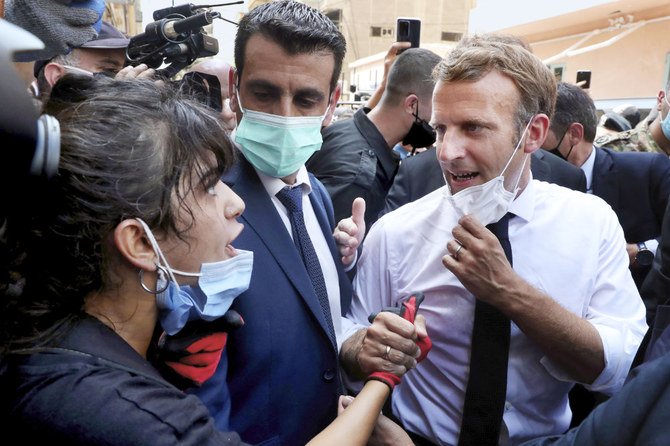 French President Emmanuel Macron stood among the ruins of Beirut’s shattered port yesterday and issued a harsh warning to Lebanese political leaders, saying that aid would not be delivered to “corrupt hands.”

“Lebanon needs political change,” the French leader said during his one-day visit on Thursday, adding that he is “not here to support the regime or the government.”

Macron set the tone for his visit on his arrival at Beirut airport, saying that he would meet with Lebanese officials “only as a matter of courtesy” and adding that “Lebanon’s crisis is a moral and political one.”

Later he was mobbed by large crowds while touring the shattered streets near Beirut port, listening to the tearful complaints of people left homeless by the massive explosion two days ago that killed more than 150 people and injured more than 5,000.

People chanted and applauded as one woman cried in French: “Help us, Mr. President.”

A few young men said: “The people want to topple the regime,” while others said: “Down with Hezbollah.”

Confronted by a young woman who criticized him for meeting with corrupt officials, Macron pulled his face mask down and replied: “I can guarantee that this assistance will not be placed in the hands of the corrupt, and a free Lebanon will rise again.”

He held the hand of the woman who asked him for help.

Macron promised “unconditional” French assistance, but said: “We will organize international aid so that it directly reaches the Lebanese people under UN supervision. I am here to launch a new political initiative. I will propose a new political decade during my meetings and I will return on Sept. 1 to follow up on it.”

He added: “I understand the anger of Lebanon’s people toward the ruling class, and this anger is caused by corruption. This explosion is the result of neglect, and I will help you change things.”

As crowds pressed forward to voice their concerns, the French leader delayed his meeting with Lebanese President Michel Aoun for over 30 minutes.

Macron was the first foreign leader to arrive in Lebanon after Tuesday’s disaster.

Ignoring his bodyguards, Macron broke from his timetable to walk along the devastated streets and wave at people who stood in the remnants of their balconies to salute France.

The French president insisted on inspecting the area devastated by the explosion before taking part in any political meetings. On his arrival in the capital, he tweeted: “Lebanon is not alone.”

With the country facing economic meltdown, a currency crisis and now the threat of food shortages, the massive blast has left the Lebanese people stunned and even more fearful for the future.

Macron said that he carried a “frank and strict message” to the authorities amid Lebanon’s economic and financial crisis.

“If reforms are not carried out, Lebanon will continue to sink,” he said.

The French delegation accompanying Macron included seven explosives specialists. They were later joined by 17 experts searching for people missing after the explosion or buried under rubble.

While Macron inspected the damage at the port, an officer from the French rescue team said that “there is still hope for survivors to be found.

After the meeting he told a joint press conference with Aoun: “We want to know the causes of the Beirut port explosion.”

A meeting at the Pine Residence, headquarters of the French ambassador to Lebanon, brought together political and party figures including loyalists and the opposition.

At the same time Progressive Socialist Party leader Walid Jumblatt called for “an international investigation committee” to investigate the explosion.

“We don’t believe in the government in any way; we do not trust it,” he said.

“There is a gross failure of the judiciary and the security services, and we have absolutely no confidence in this ruling gang.”

Jumblatt said that “without Arab and international support, we cannot continue as a country, and greater Lebanon will disappear.”

He also questioned the likely cause of the explosion, saying: “This huge amount of ammonium nitrate came to the port of Beirut and remained there for almost six years. It does not explode even if it is toxic or explosive by itself — it needs a detonator.”

He described Prime Minister Diab as “a wolf” and “nothing.”

As the site of the deadly blast was cordoned off by the Lebanese army, rescue teams continued to search for survivors or the dead.

According to Health Minister Hamad Hassan, 80 people are still missing.

On Wednesday night, 36 search and rescue experts, including firefighters accompanied by trained dogs, arrived from Czechia. Six bodies were recovered from inside the port and another three from the nearby ocean.