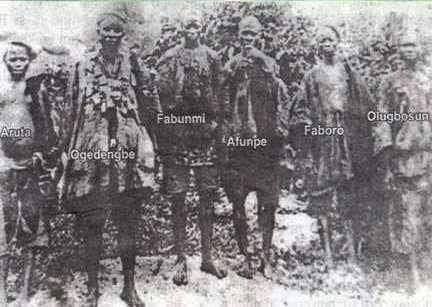 Before 1870, the determined people – Ekiti, living on the hill-side,”Ori Okiti”, literarily means “Ekiti” did not take themselves as one. But were united because of the war.

The oppression of the Ajeles (Tribute collectors) of Aare Onakakanfo Obadoke Latoosa, the then Baale of Ibadan in Ekiti land, particularly Okemesi community in the present Ekiti West Local Government Area of Ekiti State in 1877, made legendary Fabunmi of Okemesi with his group called the Ipayes, to challenge the excesses of the Ajeles, when they wanted to forcefully enter Ehinle shrine in the town.Such act is forbidden to non-indigenes and that precipitated the beginning of th Ekiti Parapo war of liberation.

The worshippers of Ehinle were in white attire and their role is to pray for peace and progress of the town every October during the festival. It was at the shrine that Fabunmi tackled the Ajeles and the leader was killed during the encounter. The incident infuriated Aare Latoosa who thereafter sent emissaries to Oba Aponlese with a demand for the head of Fabunmi with 50 able-bodied men, failure of which he threatened to reduce Okemesi to ashes. The emissaries were dealt with by Fabunmi who ignored the threat.

The Oore Okinbaloye being a great warrior that blocked the Fulani Jihadists from entering Ekiti land in Otun-Ekiti, took up the matter and invited the Pelupelu Obas (Premier monarchs) in the Ekiti Confederacy Kingdoms to his palace and they strategized on how to liberate Ekiti land from the shackles of Ibadan imperialism .

After several meetings, The Ajero of Ijero Kingdom,Oba Olamiloye Oyiyosoye moved the motion to installed the local Prince of Okemesi-Ekiti,Fabunmi Adesoye as Balogun, to lead Ekiti warriors to confront Ibadan warriors. The Pelupelu Obas supported the motion and also agreed to contribute warriors from their various Kingdoms to meet Fabunmi at Ita-Ode, now Ita-Balogun, in Okemesi – Ekiti. The first meeting point of Ekiti warriors, where the war camp was situated is the spot where the Ekiti Parapo Museum of War History,Okemesi-Ekiti is sited today.

The people of Ado – Ekiti and Ikere-Ekiti did not participate in the meeting and the war but unconfirmed information has it that Aduloju of Ado-Ekiti joined Ogedengbe Agbogungboro at the war front. The name of Aduloju as one of the warriors was noted in a brochure of the centenary anniversary of Kiriji war in Imesi-Ile on September 23, 1986.

Ekiti Parapo means (Ekiti Solidarity), It is a grand alliance of Ekiti Kingdoms and other Yoruba sub-ethnic groups such as Ijesha,Igbomina,Akoko and others under the aegis of Ekiti solidarity to liberate their territory and people from the shackles and subjugation of Ibadan people led by great warrior, Ajayi Ogboriefon under Aare Ona Kakanfo, Obadoke Latoosa.

It was a war that pitched a confederacy of Ekiti Kingdoms and Ijesha State against the tyrannical and exploitative imperialism of Ibadan, during the reign of Aare Latoosa. The Ekiti Parapo war, otherwise known as Kiriji war in Yoruba land, started in 1870 but the real confrontation started in 1877 during the Ehinle annual festival in the town.

The end- result of the war was; no victor, no vanquished at the war front but Ekiti warriors achieved their objective – independence. The significance of the war cannot be over-emphasized, it marked the end of internecine wars in Yoruba land’ most importantly, it opened the door of Ekitiland to western education through the missionaries from Egbaland.

A notable example of the ex-slaves from Ibadan was Elder Isaac Babamuboni of Iyin Ekiti, who joined Christian missionaries to spread Christianity and western education to Ekitiland in 1893.

The remote causes of the Ekiti parapo war was the collapse of the Oyo empire.

Fejeboju which means washing the face with blood; occurred during the engagement of the combatants inside a river.

Jalumi phase which means ; fall into the water, occurred when the Ibadan warriors set a trap for Ekiti warriors on the wooden bridge on River Otin during an ambush. Only Ekiti warriors who could swim, including Fabunmi did not perish by drowning.The survivors re-grouped and reinforced to resume the fighting. It was at the subsequent meeting at Oore’s palace in Otun-Ekiti that Ogedengbe was brought in to support EkitiParapo warriors.

Ogedengbe at first rejected the invitation because of the issues he had with Ibadan when the Ijeshas wanted to take Igbajo from Ibadan because of the suspicion that they were informants to the Alaafin of Oyo. During Ijesha and Igbajo war before 1866, Ibadan warriors captured Ogedengbe who later escaped but was warned not to engaged in any war against Ibadan again.

Fabunmi was a powerful Ifa priest and he had a horse which he used to fight; he prepared a charm called “Aroko”,which he sent to Ogedengbe in Ilesa through the horse. When Ogedengbe saw the horse with Aroko from Fabunmi Okemesi, he made up his mind to support EkitiParapo warriors, because he knew that failure to do so, the Ibadan warriors would subsequently attacked Ilesa and Ile-Ife, the source of Yoruba race.

It was at the last stage of the war, between Imesi-Ile and Igbajo that Oore Okinbaloye and Ajero Oyiyosoye moved to join Faboro of Ido and other warriors at the war front. They met Ogedengbe with his warriors at the bathtle ground. The war was tough.

At the war front, Fabunmi Okemesi surrendered his leadership to Ogedengbe. Information got to Aare Latoosa that all the ethnic groups of Yoruba land were gathering together in support of EkitiParapo warriors in the battle ground because of their hatred for his ambition to rule Yoruba land by force. He was particularly annoyed that Ogedengbe who had earlier been captured by Ibadan warriors had joined EkitiParapo warriors against his forces.

Aare Latoosa then moved to the war front to fight the ethnic groups supporting Ekiti and particularly, Ogedengbe but old age caught up with him and he died after a brief illness at the war camp. The news of his death was good news to the EkitiParapo warriors and this encouraged them to advance daily on Igbajo front.

At that time, EkitiParapo Association in Lagos had raised some money to buy weapons to support Ekiti Parapo warriors at the battle ground. They contacted a skillful blacksmith called Labinjo, an indigene of Imesi – Ile who was based in Lagos, he was given money to manufactured guns.

Labinjo constructed enough canon guns which sounded “Ki-ri-ji-i” created fear in Ibadan warriors. When Ibadan warriors heard the sound of the canons, they were scared and believed that Europeans were supporting EkitiParapo Armies against the Ibadan Warlords.
Ekiti and Ibadan set for fight to finish

Information reached Alaafin Adeyemi 1 in Oyo that if care was not taken, the war would ruin Yoruba land and the Oba who knew the implication, immediately wrote to the Colonialists in Lagos to come and put a stop to the war once and for all.

The Europeans subsequently went to the war front and stopped the war. They later made them signed the peace treaty which restored unity to Yoruba land in 1883.

This is the list of Ekiti Parapo war heroes:

Who are those that settled the Kiriji war?

Alaafin Adeyemi 1, wrote a letter to Revd. Wood, Olubi and the Second –in-Command of British Colonial Governor of Lagos, Sir Alfred Cornelius Moloney to come and put a stop to the war. The peace treaty was signed at Kiriji war battle ground between Imesi-Ile and Igbajo in the present Osun State on September 23rd,1886.

Afer the war, the great warrior, Ogedengbe Agbogungboro of Ijesaland who led EkitiParapo war at Kiriji battle ground, died in 1910 and a monument was erected in his honour at the round about of Ilesa opposite the palace of Owa Obokun of Ijesa land.

Also, after the war, legendary Fabunmi, the generalissimo of Ekiti Parapo warriors came back to Okemesi-Ekiti to settle with his indigenous warriors at Agbonna Hills side to guard the town against possible attacks from Ibadan warriors, after the peace treaty.

But there was a disagreement with his family when he wanted to be made the Owa Ooye when his uncle, Oba Fatimehin Aponlese, the Owa Ooye was still alive on the throne based on verbal agreement made with him before he went to war.

Fabunmi did not get the support of the kingmakers who advised him to wait till the demise of his uncle.Oba Aponlese was the longest reigning Owa Ooye in Okemesi-Ekiti, he was 150 years on the throne when he joined his ancestors.

The disagreement made Fabunmi to leave Okemesi with his loyalists and settled at a village called Mota Agoro, a boundary between Efon Alaaye and Okemesi – Ekiti.

When the Oba of Imesi-Ile, a sister town, joined his ancestors, the people of the community discovered that Fabunmi was interested in becoming the Owa Ooye after the war; and being a great warrior capable of protecting their town from the Ajeles of Aare Latoosa, the kingmakers invited Prince Fabunmi also known as Oraralada to become their King. He reigned from 1901 to 1902.

While on the throne at Imesi-Ile, people from various towns who acknowledged his greatness as a warrior, sought his favour by giving him their daughters as wives, so as to get his protection during possible wars.

One of his direct sons, Prince Isaac Adebanji Fabunmi, a hotelier based in Ijapo, Akure told this writer that his father had 16 wives across Yoruba land and that all his grandchildren could not know one another.

After the demise of Fabunmi, his two children became the Oba of Imesi-Ile in succession. According to oral tradition, Imesi-Ile was formerly known as Imesi Ipole and the people of Imesi-Igbo Odo now Okemesi Ekiti migrated from there to the present site in the 12th century.

Today, Fabunmi, a Prince of Okemesi Ekiti and an Oba of Imesi-Ile has two family houses, Adesoye compound in Okemesi-Ekiti and Fabunmi Royal House in Imesi-Ile, very close to Oba’s palace in Imesi-Ile. Till date, the two royal houses are relating well because of their children in both towns.

The Ekiti Parapo war between the confederacy of Ekiti and Ijesha States on one side and the dominant Ibadan Warriors on the other side at the tale end of the 19th century was the longest intra-tribal war in Yorubaland before the Pax Britannica(British peace treaty) was signed , which brought an end to internecine war and also brought unity to Yorubaland.