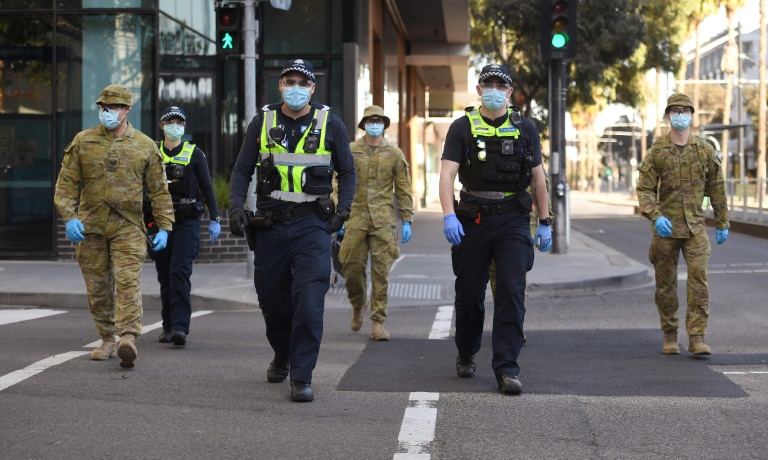 Australia’s second-largest city started a six-week curfew and the Philippine capital was ordered back into lockdown, as the number of global coronavirus cases on Monday topped 18 million.

The spread of the virus is gathering pace with worldwide deaths nearing 700,000, and a White House adviser warning that it was “extraordinarily widespread” in the United States — the worst-hit nation.

There has been a resurgence in countries that had previously brought their outbreaks under control, including Australia, where sweeping new restrictions kicked in for hard-hit Victoria state despite their heavy economic cost.

They include a nighttime curfew in Melbourne for the next six weeks, with the city ordering non-essential businesses to close, and a ban on weddings.

“It’s hard, especially knowing that in other parts of the country people are quite free to go around and (enjoy) almost normal life,” said Tracy Skilling, 42, who manages a cafe in Melbourne.

“People just seem quite despondent and down… and just want it to be over.”

Melbourne had continued to report hundreds of new cases daily even as other states in Australia reported zero or a small number.

Authorities in the Philippines have also had to reimpose curbs after infections surged past 100,000, forcing more than 27 million people — including in the capital Manila — back into lockdown on Tuesday for two weeks.

The World Health Organization has warned that the effects of the crisis “will be felt for decades to come”, and that the pandemic is likely to be protracted.

Many parts of the world are still battling their first waves of devastation.

Iran — fighting the Middle East’s deadliest outbreak — reported its highest single-day infection count in nearly a month, warning that most of its provinces are facing a resurgence.

The United States has reported 4.6 million infections, with nearly 155,000 deaths, and a top White House adviser said it had entered a “new phase” of the pandemic.

“What we are seeing today is different from March and April,” Deborah Birx, head of the White House coronavirus task force, told CNN.

“It is extraordinarily widespread,” she warned.

The pandemic has spurred a race for a vaccine, as without a viable treatment, economically costly and unpopular lockdowns in varying forms are among the few options to stop the virus.

Tens of millions have been left jobless in the United States, and similar devastation has been unleashed on the global economy too.

Protests have broken out in nations on nearly every continent, with governments facing pressure from different sections of society and from across the political spectrum.

Berlin saw thousands rally over the weekend against virus restrictions, with far-left and far-right demonstrators joined by those supporting widely debunked conspiracy theories.

The pandemic has upended life across the planet, with the need for social distancing dramatically changing the management of large crowds — from religious gatherings like the Islamic Hajj to spectator sports and cultural events.

Still, many were happy to get a chance to attend such a festival.

“It’s been half a year since I last travelled around,” tourist Wang Hua told state broadcaster CCTV. “I feel so happy and relaxed right now.”

And on the Balearic party island of Ibiza, the government has only allowed clubs with a capacity of 300 or less to open — with mega clubs closed for the season.

“When we shout, saliva can go as far as two metres,” said Jose Luis Benitez, head of the Ibiza Leisure Association.

“Who can keep distances inside a nightclub?”