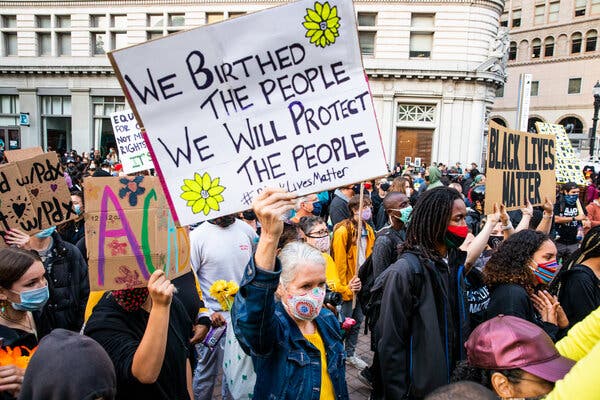 A series of strident new protests over police misconduct rattled cities across the country over the weekend, creating a new dilemma for state and local leaders who had succeeded in easing some of the turbulence in their streets until a showdown over the use of federal agents in Oregon stirred fresh outrage.

With some demonstrators embracing destructive protest methods and police often using aggressive tactics to subdue both them and others who are demonstrating peacefully, the scenes on Saturday night in places like Seattle, Oakland, Calif., and Los Angeles recalled the volatile early days of the protests after the death of George Floyd at the end of May.

The latest catalyst was the deployment of federal law enforcement agents in Portland, Ore., whose militarized efforts to subdue protests around the federal courthouse have sparked mass demonstrations and nightly clashes there. They have also inspired new protests of solidarity in other cities, where people have expressed deep concern about the federal government exercising such extensive authority in a city that has made it clear it opposes the presence of federal agents.

President Trump has seized on the scenes of national unrest — statues toppled and windows smashed — to build a law-and-order message for his re-election campaign, spending more than $26 million on television ads depicting a lawless dystopia of empty police stations and 911 answering services that he argues might be left in a nation headed by his Democratic rival, Joseph R. Biden Jr.

Mr. Biden insisted last week that the president’s pledge to inject a federal law-and-order presence into the already volatile issue of policing shows that he is “determined to sow chaos and division. To make matters worse instead of better.”

The situation has left city leaders, now watching the backlash unfold on their streets, outraged and caught in the middle. Mayor Jenny Durkan of Seattle said in an interview Sunday that the city is in the middle of a self-fulfilling prophecy, with protesters infuriated by the federal presence in Portland smashing windows and setting fires, the very images of “anarchy” that the president has warned about.

“There is no question that the actions in Portland have escalated things, not just in Seattle, but nationwide,” Ms. Durkan said.

At the same time, a new round of street unrest could intensify differences among local officials over how best to address the complaints of demonstrators and respond to vandalism and violence.

In June, amid a wide-ranging police reform movement, the Seattle City Council banned the use of tear gas and other crowd control tactics, including pepper spray. The police chief has objected, and the United States Department of Justice intervened with a lawsuit, winning a temporary restraining order on Friday blocking implementation of that ban. Over the weekend, Seattle officers used pepper spray and flash-grenades to disperse protesters.

Over the weekend, dozens of people were arrested in Seattle. Protesters in Los Angeles clashed with officers in front of the city’s federal courthouse downtown. Police also made arrests at protests in smaller cities, such as Omaha, Neb., and Richmond, Va.

In Oakland, what had been a peaceful protest led in part by a group of mothers proclaiming “Cops And Feds Off Our Streets” devolved after dark as another set of protesters smashed windows at the county courthouse and lit a fire inside.

An armed protester was shot and killed in Austin, Texas, by a motorist whose car, according to witnesses and the police, had been aimed toward a group of demonstrators also protesting the federal presence in Portland.

The protests continued in Portland on Sunday as the city neared its 60th straight day of demonstrations. As crowds gathered once again near the federal courthouse, the Portland Police Bureau said that a shooting had occurred about a block away. Officers took two people into custody, and one person showed up at a hospital with an apparent gunshot wound that was not life-threatening, the bureau said in a statement.

In Seattle on Sunday night, hundreds of protesters returned to the area around a police station in the Capitol Hill neighborhood. The gathering remained peaceful.

Some cities had welcomed Mr. Trump’s offer to send additional law federal law enforcement agents in to help combat escalating gang violence and drug crime, but insisted they would brook no federal agents on their streets arresting and tear gassing protesters.

Democratic city and state leaders pushed back against the new federal presence, but also expressed frustration that some on the streets were going too far and playing into the president’s gambit.

“I’m furious that Oakland may have played right into Donald Trump’s twisted campaign strategy,” Oakland’s mayor, Libby Schaaf, said in an interview on Sunday. “Images of a vandalized downtown is exactly what he wants to whip up his base and to potentially justify sending in federal troops that will only incite more unrest.”

In Chicago, Mayor Lori Lightfoot, a Democrat who has repeatedly clashed with Mr. Trump, had said she welcomed the president’s intervention on enacting gun control and investing in community programs.

“Any other form of militarized assistance within our borders that would not be within our control or within the direct command of the Chicago Police Department would spell disaster,” she said in a letter to the president last week.

Gov. Michelle Lujan Grisham of New Mexico on Sunday called the administration’s decision to send law enforcement agents to the state — a measure the administration has sought to distinguish from the agents sent to guard federal property in Portland — as “a bit suspect.”

“They have not provided the federal funding that was promised to Albuquerque for police and crime interventions,” she said in an appearance on ABC’s “This Week.” She said that the state would work with federal agents if they folded into existing efforts to address violent crime. But, she said, “If we’re going to incentivize unrest, then that’s something altogether different.”

Portland has been the epicenter of the most recent protests. After the initial mass demonstrations in the aftermath of Mr. Floyd’s death, protests in the city continued each night, although in smaller numbers. Police have said there was persistent vandalism, people pointing lasers at law enforcement agents, and protesters who threw objects such as commercial-grade fireworks at officers, including those protecting the federal courthouse.

Mr. Trump’s campaign has sought to capitalize on the unrest to reassure voters that he will bring an end to the turbulence. “If there is a danger for Democrats generically, it is if the Republicans are able to define them as being on the side of the anarchists in Portland,” said Scott Jennings, a veteran Republican strategist. But he said that Mr. Trump’s heated and broad-brush rhetoric has made the Republican cause harder. “The bottom line is it’s a situation that requires nuance and it’s a presidency that has not engaged in a lot of nuance.”

Democratic strategists and Biden officials expressed confidence that Mr. Trump’s attacks posed little immediate political risk even as street protests escalated. For one, they said, the president’s warning of a dark Democratic-run future is in stark dissonance with the reality that the unrest is happening under his own administration. They said the police issue was being treated by many voters as a distraction by Mr. Trump from his faltering coronavirus pandemic response and the struggling economy.

“No matter how many troops Donald Trump sends into American cities, it’s not going to distract them from their primary concern which is the coronavirus and their health,” said Jared Leopold, a Democratic strategist.

For city officials, the challenge is more immediate than the November election — it is bringing an end to nights of clashes on their streets.

Mr. Floyd’s death in Minneapolis at the end of May drew out millions in an unusual show, across a broad range of race and class, of support for racial justice.

City leaders had managed to calm the most intense protests in most cities after soul-searching debates at the community level over funding for the police and the use of tear gas on protesters. Crowds have waned in most parts of the country, though pockets of resistance have continued.

That includes Seattle, where protesters in June laid claim to several city blocks, pressuring the police to temporarily abandon a police station in the city’s Capitol Hill neighborhood and establishing a free protest zone that endured for several weeks. When the city authorities finally reclaimed the zone, there was little resistance.

And things have continued to calm. The Seattle City Council began embracing plans to make substantial cuts to the police department budget, restrict the use of tear gas and put the city on a path to reimagining policing.

Mayor Durkan and the council have at times disagreed on how far to go on issues such as cuts to the police department’s budget. She has proposed trimming just under 20 percent, in part by moving duties to other agencies, while council members have endorsed cutting the department budget in half.

Protests in Portland had continued, with Mayor Ted Wheeler decrying those who continued to use destructive tactics and business urging a return to a less disruptive life downtown.

But any possibility of that happening soon appeared to be turned on its head earlier this month when federal officers deployed to the city. Mr. Wheeler has objected, asking them to leave because their presence seemed to only reignite tensions.

Protester numbers swelled into the thousands, with nightly clashes. On Sunday morning, protesters knocked down a fence surrounding the courthouse and federal agents deployed tear gas to disperse them. The Portland Police Bureau also got involved, declaring a riot.

The federal presence in Portland has attracted new attendees to the protests, many of whom contended that the influx of federal forces was inappropriate and potentially illegal, as the state Attorney General argued in a lawsuit.

The focus on the federal agents in Portland has frustrated some activists who see the pushback against their presence as a distraction from the racial injustices that had been the focus of protests in May and June.

In Portland on Saturday night, as protesters marched to a hotel where they believed federal agents could be staying, some participants urged the marchers not to forget earlier protests against local police.