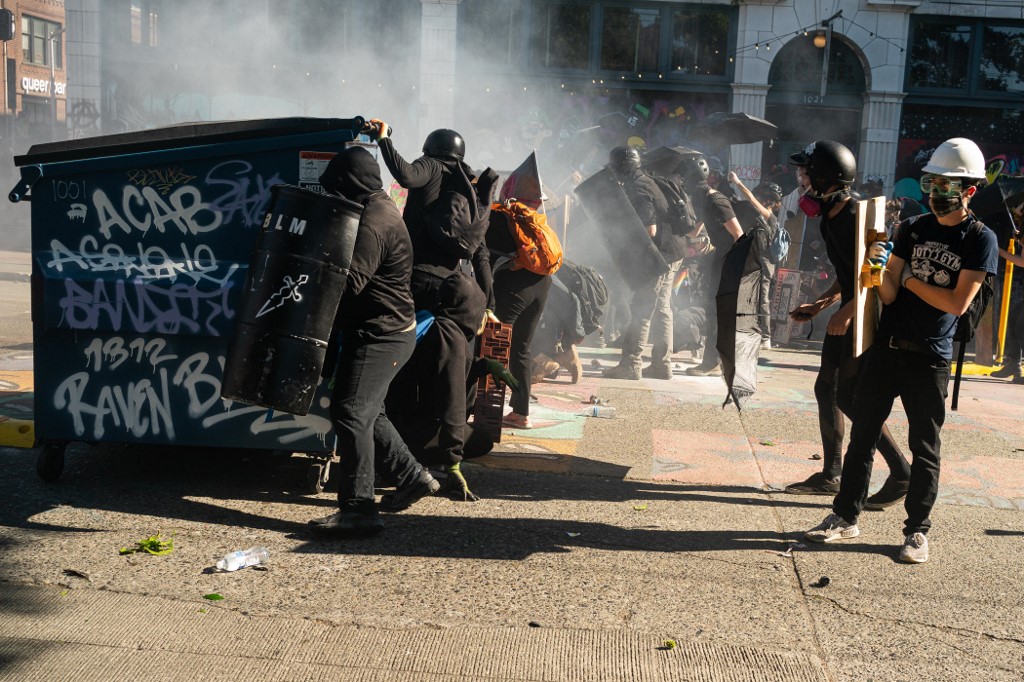 US police used flashbang grenades, pepper spray and tear gas as protestors marched in cities across the country amid a wave of public anger over Donald Trump’s planned “surge” of federal agents into major metropolises.

The demonstrations against racism and police brutality — sparked by the death in Minneapolis of unarmed African-American George Floyd — come as the US president faces an increasingly tough battle for re-election, and is campaigning heavily on a platform of “law and order”.

Protestors marched in Austin, Texas, as well as Louisville in Kentucky, New York, Omaha, California’s Oakland and Los Angeles, and Richmond in Virginia — where riot police fired chemical agents at a Black Lives Matter march, according to US media.

In Seattle the sounds of repeated small detonations rang out in some streets, and smoke rose from an area where demonstrators had set fire to trailers by a construction site for a youth detention facility, an AFP reporter observed.

Police in riot gear faced off against the protestors, some holding umbrellas against falling pellets of pepper spray.

Late Saturday, Seattle Police said 45 people were arrested in connection with the demonstrations, which they designated a riot, according to the force’s official Twitter account.

Police Chief Carmen Best implored people to “come in peace to the city,” and castigated the demonstrations.

“The rioters had no regard for the community’s safety, for officers’ safety or for the businesses and property that they destroyed,” local media reported her as saying.

The city, the biggest in the state of Oregon, has seen nightly protests against racism and police brutality for nearly two months, initially sparked by Floyd’s death.

Portland is also a stage for the highly controversial crackdown by federal agents ordered by Trump — one that is not supported by local officials, and which many say smacks of authoritarianism.

But it ended — like many before it — in a showdown between protestors and police, which escalated in a haze of tear gas and flashbang devices.

Portland police confirmed a man was stabbed, with the suspect “held down by protestors” before he was detained by officers and charged with assault, according to a statement.

The victim was transported to hospital with a serious injury.

Earlier, protestors who spoke to AFP complained of the federal agents in the city and voiced their support for the Black Lives Matter movement.

“I don’t like what’s happening down here, what Trump is doing,” Mike Shikany, a 55-year-old aerospace engineer, said, adding he did not “want to get anywhere near the little green men,” meaning the federal troops.

Portland retiree Jean Mullen, 74, said that without pressure nothing would change.

“It’s time to become the country we always brag about being. And we can’t brag anymore, about anything. We aren’t first in anything and it’s a terrible, terrible thing to see at the end of my life,” she said.

The inspector general of the US Justice Department on Thursday opened an official investigation into the federal crackdown, but an Oregon federal judge on Friday rejected a legal bid by the state to stop agents from detaining protestors.

Trump last week announced a “surge” of federal agents to crime hotspots including Chicago, following an increase in violence in the nation’s third-largest city.

Agents deployed there will partner with local law enforcement, not riot control forces as seen in Portland.

Local officials have warned they would draw the line at any Portland-style deployment.