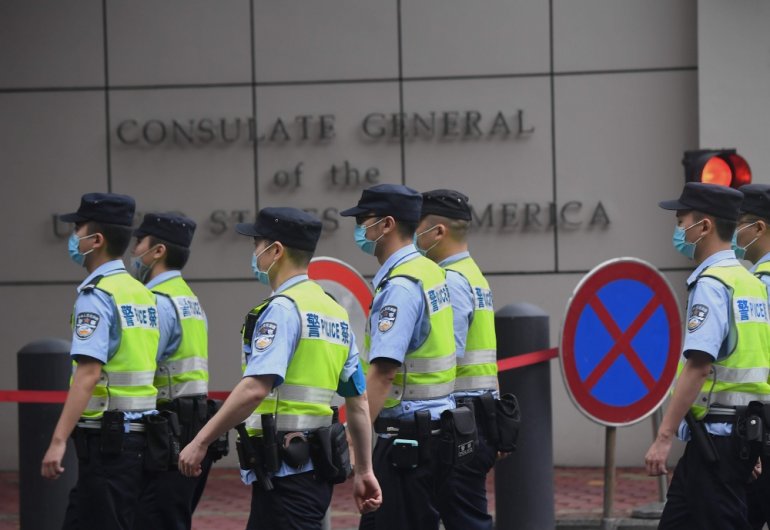 Workers removed the US insignia from the consulate in the Chinese city of Chengdu on Saturday, a day after Beijing ordered its closure as relations deteriorated in a Cold War-style standoff.

The Chengdu mission was told to shut in retaliation for the forced closure of Beijing’s consulate in Houston, Texas, with both sides alleging the other had endangered national security.

The deadline for the Americans to exit Chengdu remains unclear, but AFP reporters saw a worker on a small crane removed a circular US insignia from the front of the consulate, leaving just an American flag flying.

Cleaners were seen carting big black bags of rubbish from the consulate in the early hours of the morning. One of them had split and appeared to contain shredded paper.

At least ten bags were removed from the building.

Other staff were seen moving trolleys around inside, one carrying a large empty metal bin, while some wheeled suitcases.

Beijing says closing the Chengdu consulate was a “legitimate and necessary response to the unreasonable measures by the United States”, and has alleged that staff at the diplomatic mission endangered China’s security and interests.

Washington officials, meanwhile, said there had been unacceptable efforts by the Chinese consulate in Houston to steal US corporate secrets and proprietary medical and scientific research.

The last Chinese diplomats left the Houston consulate on Friday as a 72-hour deadline to close the mission passed. Officials there were seen loading large sacks of documents and other items onto trucks, and throwing some in bins.

See also  Ambazonia Attack: “All The Governors In Nigeria Are Helpless” – Ishaku

Tensions have soared between the two powers on a range of fronts including trade, China’s handling of the coronavirus and a new security law for Hong Kong, with the US this week warning of a “new tyranny” from China.

China on Friday blasted the Houston move and blamed Washington for the sharp deterioration in relations.

Closing the Chengdu consulate was a “legitimate and necessary response to the unreasonable measures by the United States”, the foreign ministry said in a statement.

“The current situation in China-US relations is not what China desires to see, and the US is responsible for all this,” it said.

Foreign ministry spokesman Wang Wenbin told reporters that some US staff in the Chengdu consulate “were engaged in activities outside of their capacity, interfered in China’s internal affairs, and endangered China’s security and interests”.

The Chengdu mission was also where senior Chinese official Wang Lijun fled in 2012 from his powerful boss Bo Xilai, who was then head of the nearby metropolis Chongqing, and has since been jailed for life for corruption.