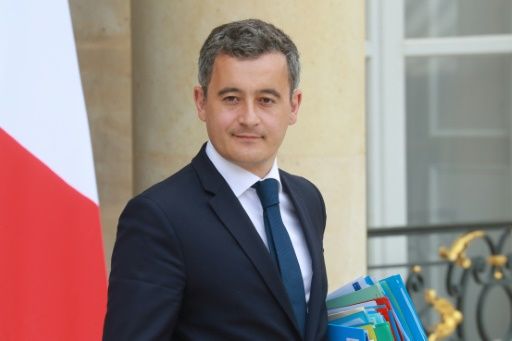 Gerald Darmanin has had a tumultuous first two weeks as France’s interior minister as the country questions whether someone under investigation for rape allegations can and should be its “top cop”.

On Wednesday evening, a feminist association piled further pressure on Darmanin by saying they were seeking new legal action against him over alleged abuse of influence while he was mayor of Tourcoing.

Darmanin’s lawyer, Mathias Chirchportich, rejected the accusations and quoted a text message from the plaintiff in Tourcoing dating from the time he was appointed to the government and stating that for her “the matter is closed”.

The 37-year-old’s appointment on July 6 drew immediate outrage that has shown no signs of abating – women’s rights campaigners have picketed every one of Darmanin’s public appearances to date.

He is accused by Sophie Patterson-Spatz of raping her in 2009 after she sought his help to have a criminal record expunged while he was a legal affairs adviser with the UMP, the predecessor of France’s main right-wing party, the Republicans.

Darmanin maintains they had consensual sex.

The case has been thrown out multiple times, but appeals judges in Paris last month ordered a new investigation after Patterson-Spatz approached France’s highest court.

The uproar over Darmanin’s promotion to a key cabinet position just weeks after that ruling seems to have taken the government and President Emmanuel Macron’s centrist party by surprise.

Their defence of Darmanin has focused on the presumption of innocence, even as they appear to have exonerated him despite an ongoing inquiry.

Macron explained on French television that he had a “relationship of trust, man-to-man” with Darmanin, a phrase many criticised for being tone deaf.

A member of Macron’s team defended the appointment by telling AFP the criminal case was evolving “in the right direction” and “presented no obstacle” to Darmanin’s elevation.

Darmanin himself has complained of a “manhunt” and told a regional newspaper this week it was hard for a falsely accused person to explain to their parents “what happened because, it’s true, I lived a young man’s life”.

Patterson-Spatz also accuses Darmanin of sexual harassment and abuse of power. He has filed a libel complaint against her in return.

Even if he is ultimately cleared, critics say the mere hint of impropriety makes Darmanin unsuitable for the interior ministry job, especially as Macron had promised a “moralisation of public life” on his watch.

“It is not certain that we are properly evaluating the damage that this case is causing,” Philippe Moreau-Chevrolet, an analyst at the Sciences Po university in Paris, said of the political support being drummed up for Darmanin at a time of widespread mistrust in government.

A cabinet minister who asked for anonymity said: “What is annoying is that this issue will ripple out.”

In a press interview, Darmanin said he was “completely at ease,” but on Tuesday his lawyers warned that he reserved the right to sue over “any defamatory remarks that stain his honour and esteem.”

Even within his own ministry, Darmanin’s appointment has raised eyebrows – if questioned in the probe, it would be by police officers of whom he is now the boss.

And his fellow cabinet members are finding themselves in difficult positions.

Elisabeth Moreno, the new minister for gender equality, said after a “woman-to-man” conversation with Darmanin that he deserved the benefit of the doubt, “but if he is found guilty, we will talk again.”

One minister told AFP that “Legally speaking, I think the case falters. But then follows the moral question: Has Darmanin always behaved well towards women?”

The allegations are not the first against Darmanin – a woman accused him of using his position as mayor of the northern city of Tourcoing to seek sexual favours from 2014 to 2017, though prosecutors dismissed that case in 2018.

Women’s groups gathering under slogans such as: “The culture of rape on the move” – a play on Macron’s Republic on the Move party – have staged protests in Paris and the rest of France, even in Brussels, since Darmanin’s appointment.