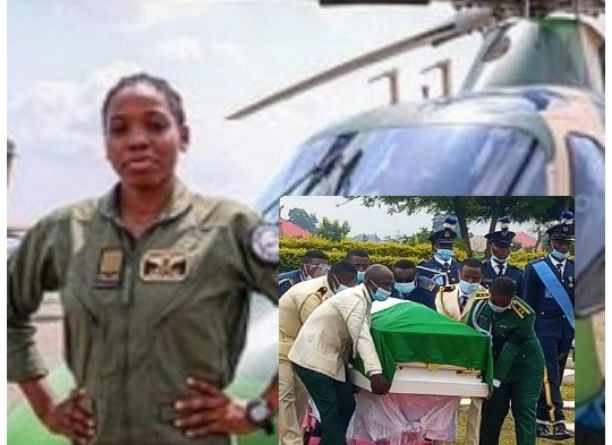 The remains of the late Flying Officer Tolulope Arotile have arrived the National Military Cemetery in Abuja for interment.

Ms Arotile, Nigeria’s first female combat helicopter pilot, died on July 14 after being hit by a car on reverse at the Air Force Base in Kaduna.

The ambulance conveying Arotile’s body arrived the cemetery at 8:38 am on Thursday.

She is to be buried with full military honours.

Dignitaries have started arriving at the cemetery including top military officers.

She made history in October 2019, when she was winged as Nigeria’s first female combat helicopter pilot in the Nigerian Air Force’s 55 years of existence.

At her decoration last October, flanked by the chief of air staff, Sadique Abubakar, an air marshal, and the women affairs minister, Pauline Tallen, she marched to receive her “wing” with such immaculate finesse that mirrored her passion for the job.

“I joined the military simply out of passion for it. Being a military personnel has been a long term ambition for me,” she said in an interview shared by the Nigerian Air Force.

“The carriage and what they stand for is simply exceptional,” she added.

Not that she had no other qualifications to chase other job opportunities as she had a degree in mathematics. But for her, being in the military was all she craved.

Her profile was well scripted in a tribute released by NAF, where she was described as a “very intelligent, disciplined, confident and courageous young officer who added value wherever she served.”

An official release by the Nigerian Air Force says as of October 2019, Tolulope had acquired 460 hours (about 19 days) of flight within 14 months in flying a helicopter.

Those hours of flying were partly spent as a squadron pilot in Operation Gama Aiki in Minna, Niger State, and across the North-central, where she flew her quota of the anti-banditry bombardments to rid the area of terror.

In September 2012, Arotile was admitted into the Nigerian Defence Academy, Kaduna, as a member of the 64 regular course, where she finished from in 2017, bagged a degree in mathematics, and was commissioned as a pilot officer.

She was winged as the first ever female combat helicopter pilot in the Nigerian Air Force two years later, having completed pilot training courses at the Starlite International Training Academy, South Africa.