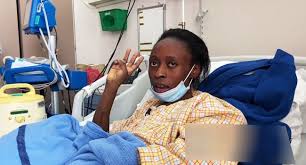 A 29-year-old Nigerian mother of quadruplets identified as Suliyat Tijani has cried out for help after welcoming her babies in Dubai.

The Oyo indigene who relocated to Dubai in 2017 to be with her Chef husband Shakiru, had plans of returning home before the birth of her children but the COVID-19 restrictions on air travel between Nigeria and Dubai stopped the trip.

“When my wife told me she was pregnant, and she went for a scan, I told her she was joking.

Suliyat on her own part said;

“I never thought of having four babies, because there’s no money.”

The couple now face hospital bills of over N30m after she went into labour and delivered the set of quadruplets. It was further gathered that a support group has offered to assist the family with 5,000 dirhams even as the young couple still seek more support.