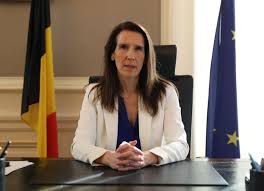 Prime minister Sophie Wilmès will this morning call to order the latest meeting of the consultative committee, called to discuss the sustained new increase in infections by the coronavirus Covid-19.

The consultative committee is composed of representatives of the federal and regional governments, and this meeting was called at the initiative of Flemish minister-president Jan Jambon. Two Flemish provinces – Limburg and Jambon’s native Antwerp – have been particularly affected by the latest increases.

The committee also has the power to ask experts to be present, and two are expected to take part today to advise the politicians: Dr Erika Vlieghe, chair of the GESS group of experts on relaxing the lockdown; and Karine Moykens, who chairs the committee on contact tracing.

The latter is a subject important to tackling the recent flare-up of new infections. The idea is that when a person becomes infected, the tracers get in touch with everyone they have been in physical contact with, and those people are tested and isolated. In that way, the spread of the virus can be slowed or even stopped.

But tracing in Belgium has got off to a slow start. Now the committee will have to think of how to make the system more effective, so that more contacts can be traced and isolated, eventually giving the virus nowhere to spread to.

One suggestion has been to include family doctors in the tracing network, but the Flemish association for GPs, Domus Medica, has objected that doctors are already overstretched, without taking on a task that requires no medical expertise.

READ  June 12 Annulment Will Haunt Me For Life – IBB

Elsewhere, the data protection authority, formerly known as the Privacy Commission, has given the green light to enquiring into an infected person’s movements, something that had been raised as a possible privacy issue.

“It is literally stated in the Royal Decree on contact tracing that people can be asked about their movements,” said authority chair David Stevens. “So you should also be able to ask where exactly that person has been, when that was and with whom.”

The committee is also expected to discuss whether to bring forward the meeting of the national security council planned for Thursday; as well as a possible partial reversal of some of the relaxations introduced in previous phases of the deconfinement.

The Brussels Times will report on the results of today’s meeting as they become available.