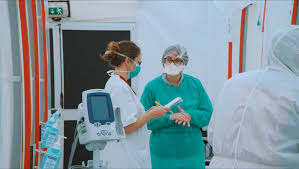 The average number of additional infections with the new coronavirus (Covid-19) has climbed back up to almost 100 per day over the past seven days, according to the most recent figures from Sciensano.

The trend of new infections per day has risen by 12% over the 7-day period from 6 to 12 July, meaning that an average number of 99.7 additional people tested positive for the virus.

Since last week, the number of newly-recorded infections has been on the rise again, leading the National Security Council to postpone its decision on the start of Phase 5. The increase occurs in most provinces, but especially in those with larger cities.

“On a national level, an increase in the number of new infections has been observed in the last 2 weeks,” the health authorities said, adding that most new infections occur among the active population, aged between 20 and 59 years old.

The total number of confirmed cases in Belgium, since the beginning of the pandemic, is 63,039. The total reflects all people in Belgium who have been infected, and includes confirmed active cases as well as patients who have since recovered, or died from the consequences of the virus.

The number of new hospital admissions and deaths, however, are still decreasing.

From 9 to 15 July, the authorities recorded an average of 9.7 new hospital admissions per day, which is a decrease of 7% compared to the daily average of 10.4 new patients in the week before.

In total, 150 patients are admitted to hospital, of which 27 are in the intensive care unit.

An average number of 1.9 deaths occurred per day over the 7-day period from 6 to 12 July. The trend decreased by 46%, compared to the daily average of 3.4 deaths in the week before.

The total number of deaths in Belgium since the beginning of the pandemic is currently 9,792.

“At this stage, it is important to continue to respect the measures in order to slow down the increase,” Sciensano said.