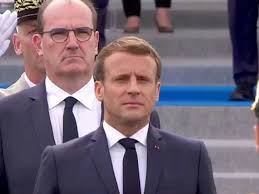 French President Emmanuel Macron hosted a Bastille Day ceremony on Tuesday that was largely scaled back due to the coronavirus. He will also address the pandemic and his goals for the future in a television interview amid growing fears of a possible second wave of infections in France.

For the first time since 1945, French authorities called off the annual military parade along the Champs-Élysées in Paris that usually marks the storming of the Bastille fortress on July 14, 1789, that launched the French Revolution. Just 2,000 soldiers – half the usual number – will gather at the Place de la Concorde.

The battle against the virus, which has claimed more than 30,000 lives in France, was the main focus of the official event in Paris as Macron seeks to highlight France’s successes at a Bastille Day recalibrated to celebrate the heroes of the coronavirus pandemic.

Macron has also chosen to renew another tradition, the July 14 president’s interview, to detail his plans for surmounting the devastating social and economic crisis wrought by the Covid-19 outbreak. He abandoned the ritual after taking office three years ago with a pledge to shake up politics as usual, but his new government is now under pressure to prove it can rise to the unprecedented challenges it is facing.

Prominent doctors urged this week that face masks be mandatory indoors while authorities have warned the virus appears to spreading faster in several areas as people let down their guard following the easing of France’s lockdown, which began March 17 and began lifting on May 11.

Despite billions of euros pledged to minimise the economic damage caused by the pandemic, questions remain over how the government will foster recovery from a recession expected to destroy hundreds of thousands of jobs.

Officials said the president would address the health crisis as well as several measures to revive economic growth on Tuesday.

To avoid spreading the virus, no crowds will be allowed near the Place de la Concorde and just 2,500 guests will be allowed on sparsely filled viewing benches, with only a handful of tanks and other military equipment on display this year.

The French air force conducted its traditional flyovers of the Arc de Triomphe and the Champs-Élysées, including an A400M transport plane used to evacuate Covid-19 patients from overwhelmed hospitals at the height of the crisis.

The flights were part of Operation Resilience, which Macron launched in March and also saw a military field hospital set up in hard-hit eastern regions of the country. Representatives of Germany, Switzerland, Austria and Luxembourg have been invited to thank the countries for taking in a total of 161 French patients in critical condition.

Macron’s aides have said he will also use the occasion to honour Charles de Gaulle on the 50th anniversary of the general’s death and soon after the 80th anniversary of his famous speech of June 18, 1940, calling on the French to resist the Nazi occupation.

The ceremony will close with a rendition of the national anthem, “La Marseillaise”, and a flyover of the Patrouille de France acrobatics jets trailing blue, white and red smoke in honour of frontline health workers.

Later on Tuesday, parks near the Eiffel Tower will be closed to crowds for the Bastille Day fireworks in Paris. Most other cities have called off their shows altogether.

Macron’s critics have accused him of initially underestimating and then mishandling the medical crisis. He has limited himself to a few televised addresses since March, while his previous premier Édouard Philippe enjoyed a popularity boost over his perceived steady hand.

Soon after a cabinet re-shuffle last week that saw him take control of a revamped government, new Prime Minister Jean Castex riled unions by saying he would move quickly to finalise a controversial pensions overhaul that was suspended by the crisis.

Macron pushed ahead on the signature reform despite massive strikes over the winter that were fueled in part by the anti-government anger laid bare in the “Yellow Vest” protests of 2018 and 2019.

His interview Tuesday is expected to set out his other priorities for the almost two years that remain before he faces re-election in 2022.