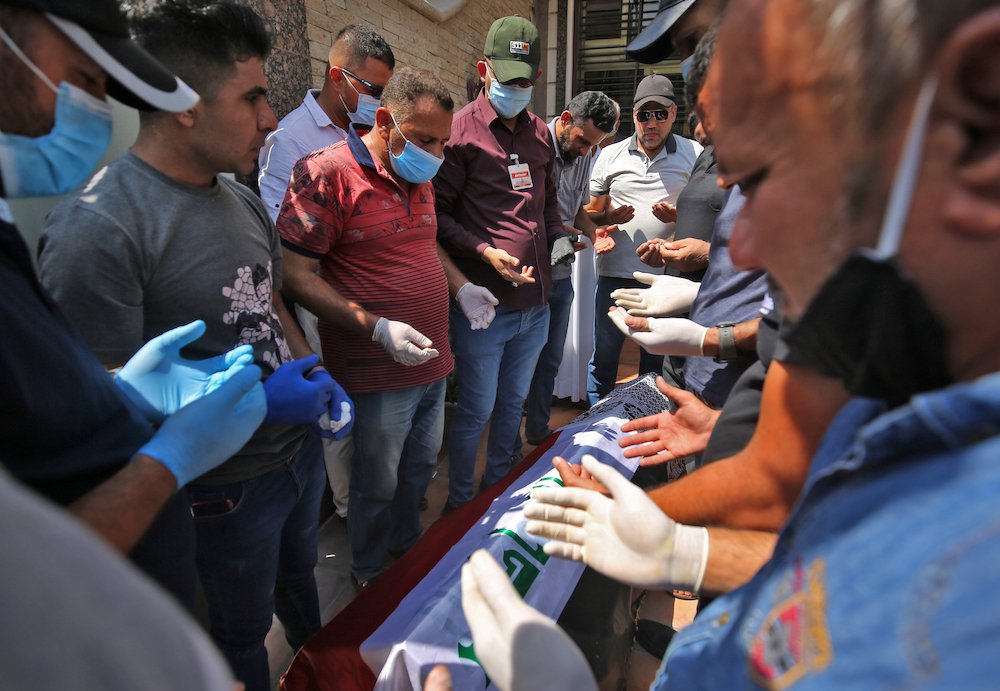 In a move that shocked the Arab world late on Monday, unidentified gunmen on a motorcycle shot and killed Hisham Al-Hashimi, a leading Iraqi expert on Daesh and other armed groups. As with so many unsolved murders of prominent public personalities in Iraq since 2003, there is no dearth of suspects. The big question is what action Prime Minister Mustafa Al-Kadhimi can afford to take under the circumstances.

The 47-year-old Al-Hashimi was a well-respected Iraqi academic and political analyst. His expertise on Daesh earned him the position of adviser to the US-led Global Coalition to Defeat ISIS. After the destruction of Daesh’s self-styled caliphate in 2018, he shifted his focus to the workings of the Hashd Al-Shaabi (or Popular Mobilization Forces) units that participated in the anti-Daesh campaign.

Al-Hashimi had expressed fears in recent weeks that Iranian-backed constituents of Hashd had him in their crosshairs. A medical source at the hospital where he was taken after Monday’s shooting said he had suffered “bullet wounds in several body parts.”

Iraq witnessed a spate of deadly attacks on intellectuals, academics and moderate politicians at the height of the insurgency. More than 500 people have been killed since protests erupted in Oct. 2019, demanding an end to corruption and Iran’s overarching influence. But analysts believe that with Al-Hashimi’s killing, a loud warning shot has been fired across Al-Kadhimi’s bow.

“The assassination is intended to signal militia displeasure with Al-Kadhimi and his inner circle,” said Michael Knights, a noted Iraq analyst and Lafer Fellow at the Washington Institute for Near East Policy.

“They are saying that there is a cost to the Al-Kadhimi team for arresting militia members and disrupting militia money-making enterprises,” he added.

The use of murder to scare critics is of course not something new to terror groups in the Middle East.

The assassination of Lebanon’s former prime minister Rafik Hariri and the subsequent attacks that killed or maimed critics of Syria and Hezbollah in the 2000s are prominent examples of this.

See also  Covid-19 ‘can survive for 28 days on surfaces’, according to lab study

Late last month, Al-Kadhimi had 14 members of the Iran-backed Kataib Hezbollah arrested in Baghdad when the group was preparing to carry out a rocket attack on bases hosting US troops.

Although the militants were quickly released, the action suggested that the new government was prepared to take a firm stance against rogue Hashd elements.

Knight’s view is echoed by Joel Wing, author of the Musings on Iraq blog, who says Kataib Hezbollah is a prime suspect in Al-Hashimi’s murder.

“The message was a simple one,” he told Arab News, adding: “those who criticize their activities will be threatened like Al-Hashimi was, and can be killed with impunity.”

Wing says groups such as the Kataib feel they are part of the state now and “therefore have free rein to kill protesters, critics and anyone else they feel fit to execute, because no one has stopped them before.”

The US-led invasion of 2003 brought the turbulent Saddam era to an abrupt end, but new troubles cropped up in the form of insurgency, terrorism, sectarian politics and finally Daesh. Today Iraq is torn between a pro-Iran camp, which wants to get rid of the last vestiges of US military presence, and nationalists, who resent the pervasive influence of Tehran in their country’s affairs.

Lawk Ghafuri, an Iraq analyst and journalist for the Erbil-based Kurdish media outlet Rudaw, views Al-Hashimi’s assassination as a “clear message to all writers and researchers in Iraq that there are red lines, and if you cross them, you’ll be murdered.”

He said: “This is a huge step backward for freedom of expression and a free press in Iraq.”

According to Ghafuri, if the assassins are revealed as Iran-backed members of Hashd, Al-Kadhimi’s promise of action might prove difficult to fulfill, since he already faces pressure from the same elements over the arrest of the Kataib militants.

In his final commentaries, Al-Hashimi had rebuked the Hashd, among other groups, for operating outside of the control of the state, a criticism they are extremely sensitive to, Ghafuri said.

He added: “Al-Hashimi had outlined in detail the new structure, difficulties, challenges, and internal issues within the Hashd Al-Shaabi. He described the way they are operating, and he also illustrated the divisions in Hashd, where some are loyal to Iraq’s Grand Ayatollah Al-Sistani and others loyal to Iran.”

Regardless of Al-Kadhimi’s next course of action, Ghafuri warns that Iraqis must be prepared for more chaos going forward.

“If you stay silent, the rule of law will be in a bad situation. But if you implement the rule of law, the Iranian-backed militias will cause trouble for you,” he said.

However, as Knights says, Al-Hashimi enjoyed a lot of respect among Iraqis and was a supporter of last year’s anti-government protests. As a result of this, his murder could prove a step too far for Iranian-backed Hashd fighters.

“The militias killed a popular supporter of the protest movement and a recognizable face of Iraqi academia when they targeted Al-Hashimi,” he said, adding that “the action may prove counterproductive for the militias.”

Wing said that, while Al-Hashimi’s death has led to an international outcry, “it is still a dangerous game for the prime minister to respond.”

At the most, Al-Kadhimi “might be able to pull off an arrest of a few members, if the authorities can find direct evidence in the assassination,” he said.

“Anything else could bring a wave of protests in the Green Zone, as happened after the raid on Kataib Hezbollah. It could bring even more rocket attacks on facilities that host Americans in defiance of his demands that they stop, and even the fall of his government if the ‘Fatah List’ decides he has gone too far,” he added.

Wing was referring to a powerful bloc in parliament that vigorously defends Iran’s interests and policies in Iraq.

Wing does not believe Al-Hashimi’s murder was a direct response to the arrest of Kataib members, but sees it as “another poke in Al-Kadhimi’s eye, saying they don’t believe he has the power to stop their activities.”

He said: “When the Hashd were made part of the security forces, praised for their war against Daesh, and their crimes were actively covered up, it gave them the sense that they could do what they wanted. And this is just the latest example.”

He added: “If they could get away with destroying part of Tikrit and the surrounding towns after the city was retaken, kidnapping and murdering hundreds of men during operations in Anbar, and displacing thousands of people during the war, who is going to stop them for killing one analyst?”

Still, Knights believes Al-Kadhimi’s people will not back down because of the July 6 assassination, although they may move more cautiously now.

“When intelligence suggests future militia attacks or justifies arrest operations, they will probably detain more militia fighters,” he said, adding: “The tit-for-tat pattern has begun, but Al-Kadhimi is not easy to intimidate.”