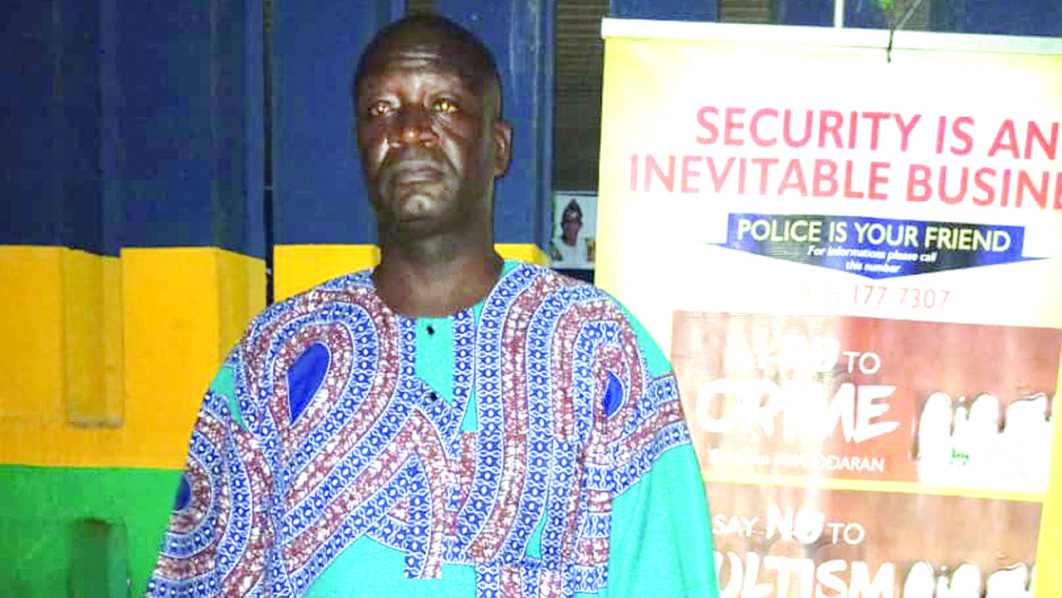 Oyebola was arrested following a complaint by his 24-year-old daughter, who pleaded for anonymity.

The lady reported at the Owode-Egbado divisional headquarters that her father has been forcefully having carnal knowledge of her since 2015, shortly after the death of her mother.

But according to her, when it dawned on her that her father was all out to ruin her life, she ran away from home and reported her ordeal to a non-governmental organisation, the Advocacy For Children And Vulnerable Persons Network.

It was the NGO that eventually led her to the Owode-Egbado Police Station to report her father over his alleged incestuous relationship with her.

The Police Public Relations Officer (PPRO), Abimbola Oyeyemi, who disclosed this in a statement yesterday, said the Divisional Police Officer (DPO) of Owode-Egbado division, Olabisi Elebute, led detectives to the pastor’s house and arrested him.

Abimbola, a Deputy Superintendent of Police (DSP), said the pastor, when interrogated, made a confessional statement, admitting that what his daughter had complained about him was true.

The Commissioner of Police, Kenneth Ebrimson, has directed that the pastor should be transferred to the Anti-Human Trafficking and Child Labour Unit of the State Criminal Investigation and Intelligence Department (SCIID) for thorough investigation and prosecution.

In a related development, the Ekiti State Police Command yesterday arraigned a 60-year-old Deborah Ajisegbede and one Ola Sunday, aged 21, on a two-count charge of alleged conspiracy and rape of a two-year-old girl.

The Investigating Police Officer, Opeyemi Osayinro, told an Ado-Ekiti Chief Magistrates’ Court that the offence was committed on June 27 in Erinmope Ekiti, Moba Local Government Area of the state.

Narrating the incident to the court, the police officer said that Ajisegbede, the great grandmother of the victim, who has been medically confirmed to be nursing high blood pressure ailment, usually released the baby to the girl’s father every night due to her health condition.

Osayinro said that the great grandmother later discovered that the girl usually experienced pains in her private part while bathing her and took her to a Primary Health Centre for checks and treatment. To her amazement, she was told that the baby’s private part has been tampered with.

The prosecutor further told the court that the Divisional Police Officer in Otun-Ekiti stepped into the case when he got an anonymous call from the health centre reporting the matter and soliciting the intervention of the police.

In her ruling, Chief Magistrate, Mrs Adefumike Anoma, frowned on the incessant mismanagement of the care and welfare of a child as well as carelessness of some parents and families. Anoma said this had led to an increase in the assault and defilement of minors in society.

She, therefore, granted the great grandmother bail in the sum of N20,000 with one surety in like sum due to her health condition, while she ordered that the defendant be remanded at the Nigeria Correctional Centre pending issuance of legal advice.

The chief magistrate also ordered that the grandmother, father-in-law and mother of the victim be arrested over alleged negligence and culpability in the case and adjourned the case till August 12.
Similarly, the Kebbi State Police Command has arrested 28-year-old Kabiru Hassan, of Kamba town, Dandi Local Government Area of the state for allegedly defiling an eight-year-old girl in an uncompleted building.

Confirming the arrest to newsmen yesterday, the Commissioner of Police, Mr Agunbiade Oluyemi Lasore, said many rapes cases were later reported to the police, and he assured the public that all would be charged to court.

Lasore said: “On May 30, the suspect, Kabiru Hassan, lured the minor to an uncompleted building and forcefully had sexual intercourse with her. He confessed to the crime.”

Lasore also disclosed that another suspect, Musa Abubakar of Argungu town, lured a 10-year-old girl into his room at Tudun Wada area of the town and forcefully had sexual intercourse with her.

“I am highly miffed with the incessant cases of rape and other sexual and gender-based violence, which are barbaric in nature. I warn the perpetrators to fear Allah and desist forthwith or face the full wrath of the law if arrested,” he said.