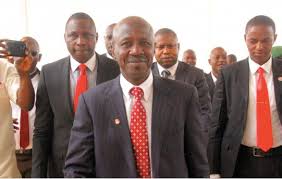 The Karu, Abuja residence of Ibrahim Magu, the embattled boss of the Economic and Financial Crimes Commission (EFCC) was searched by security operatives on Tuesday evening.

It is understood that the search is connected with the ongoing investigations into allegations of corruption levelled against Magu.

The house searched is located on Abduljalil Street, Karu Site, on the outskirts of Abuja, and the operatives left with some important documents after several hours of searching the residence.

It will be recalled Magu on Monday, was “arrested” on Monday by security operatives and appeared before a presidential investigative panel headed by Justice Ayo Salami which is hearing the allegations against him.

After Monday’s hearing, Magu was kept in detention at the Force Criminal Investigation Bureau (FCID). From there, he appeared again before the panel when it reconvened on Tuesday.

As previously reported , Magu was moved back to custody after Tuesday’s hearing.

However, a source revealed to our correspondent that security operatives, armed with a search warrant, stormed the residence of the embattled anti-corruption czar in connection with the ongoing investigations.

As at press time, the development could not be confirmed further as EFCC’s spokesman, Dele Oyewale, could not be reached on his phone while Magu’s media assistant, Tony Amokeodo, neither picked nor responded to text message sent to his known telephone line.