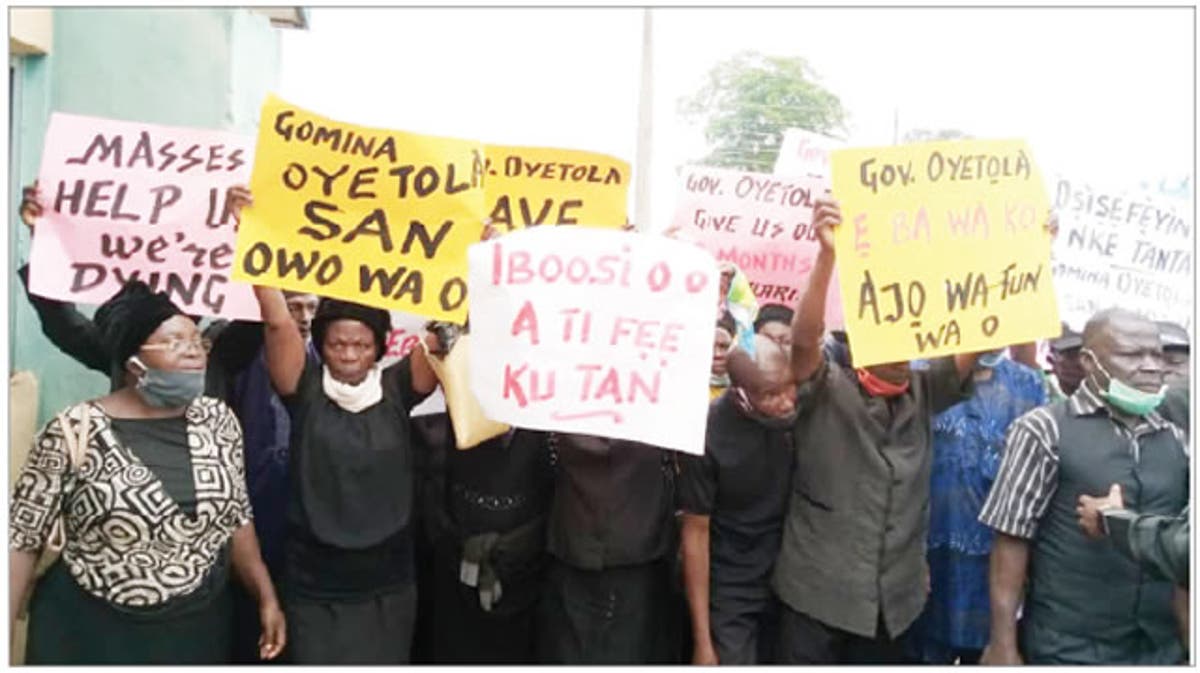 Some retired civil servants, who exited service under the Contributory Pension Scheme in Osun State, on Wednesday in Ile-Ife, staged a peaceful protest over their unpaid pensions and modulated salary arrears owed them while in service.

The protesters, led by a former Chairman of the National Union of Teachers, Ife Central Local Government Area, Niyi Adefare, converged on the Oduduwa College and moved through Sabo to Enuwa and stopped at the Ile Oodua palace of the Ooni of Ife, Oba Enitan Ogunwusi.

They later moved to Oke Itese and visited a state-owned radio station in the town, where they expressed their displeasure over the non-payment of their entitlements.

The retirees, who displayed placards with inscriptions in Yoruba, some of which read: ‘Governor Oyetola, pay us our 30-month half-salaries’, ‘We are dying of hunger’, and ‘The ‘masses should help us’, among others, lamented the hardship that the non-payment of their entitlements had inflicted on them.

Speaking on behalf of the protesters at the Ooni’s palace, Olafare sought the intervention of the monarch on the matter.

He urged the monarch to speak with the relevant authorities and ensure that the pensioners get their entitlements without further delay.

Adefaye said, “Our members are old; some of us are managing one sickness or the other, but we have not been able to procure drugs and other essentials, because our money has not been paid by the state government.

“Some of our members have died; some are on sick beds, while some, who still have strength, are afraid of what will happen next. It is so sad that we are living like this after serving this state meritoriously.”

Receiving the protesters on behalf of the Ooni, the Laadin of Ife, Chief Kayode Awofiranye, who spoke in Yoruba, assured them that their message would be delivered to the monarch.

Similarly in Anambra State, retirees asked the state government to adjust their pensions to reflect the new minimum wage approved by the Federal Government last year.

In a petition to the state House of Assembly, the pensioners, who retired mostly in 2011, said their pensions that were based on the economic indices of 10 years ago were no longer sustaining them.

They said as a matter of law, pensioners were entitled to progressive adjustment in their pay each time a new minimum wage was passed into law every five years.

They appealed to the lawmakers to prevail on Governor Willie Obiano to obey the law on the harmonisation of pension.