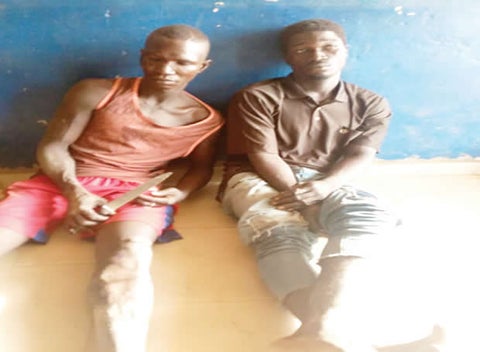 Personnel of the Ogun State Police Command have arrested two robbers on the Long Bridge, Lagos-Ibadan Expressway, in the Obafemi-Owode Local Government Area of the state while dispossessing motorists of their belongings.

The Police Public Relations Officer in the state, Abimbola Oyeyemi, said this in a statement on Sunday.

Oyeyemi said the suspects – Ibrahim Nura, 27, an indigene of Kebbi State, and Isaac Kyegh, from Benue State, were arrested while dispossessing motorists of their valuables on the bridge.

He explained that the suspects, who reside at Kara, Isheri, Ogun State, were apprehended while attacking one Adebayo Agoro and Toheeb Olalekan, whose vehicle developed a mechanical fault on the bridge.

He added that the victims were attacked by the suspects while trying to fix their faulty car.

According to him, the two men suddenly appeared from under the bridge and threatened the duo with knives and a cutlass so as to dispossess them of their valuables.

Oyeyemi stated, “In the process, the patrol team from the Warewa Division, led by the DPO, SP Folake Afeniforo, which was on a routine patrol on the bridge, caught them in the act.

The PPRO said a jack knife was recovered from the suspected robbers.

He added that the Commissioner of Police in the state, Kenneth Ebrimson, had ordered the immediate transfer of the suspects to the Special Anti-Robbery Squad for discreet investigation and prosecution.

Meanwhile, a yet-to-be-identified motorist crushed a motorcyclist to death on the Long Bridge on Sunday.

The motorist was heading to a destination in the state when he lost control of the vehicle and crushed the motorcyclist to death.

Another motorcyclist, who was also plying the route, was reportedly knocked down by the motorist.

The second motorcyclist, however, survived the crash and was rushed to the Oakland Hospital, Warewa, for treatment.

An eyewitness, Quadri Aderibigbe, said the motorcyclist’s corpse had been deposited in a mortuary, adding that the other victim suffered minor injuries.

He stated that policemen from the Warewa Division, led by Afeniforo, arrested the driver and impounded his vehicle.

Aderibigbe said, “The accident involved a black Acura car and two motorcyclists. The driver of the car lost control of the vehicle and knocked down both victims.

“One of the motorcyclists died on the spot, while the other survived the accident, but sustained minor injuries.

“From what I gathered, the injured motorcyclist has been taken to the Oakland Hospital for treatment, while the corpse was deposited in the Divine Touch Private Mortuary in Ibafo.”