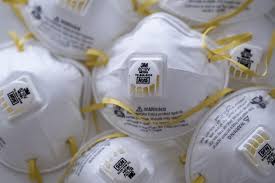 Chinese manufacturers carried out a concerted campaign to flood the world market with fake face masks at the height of the coronavirus pandemic, De Tijd has revealed.

The paper reveals that importers were the first to be taken in by unscrupulous manufacturers in China, who stopped at nothing to convince them to buy masks, including fake certificates and even hand-stencilled EU approval signs.

When the coronavirus Covid-19 pandemic began to spread across the world, many administrations were caught unawares. Not least in Belgium, where the health ministry had recently destroyed a strategic stock of personal protective equipment (PPE) because it was too old.

When the need for huge amounts of PPE suddenly became clear, there was nothing in stock. And as other countries found themselves in a similar position, the industry suddenly became a seller’s market, as demand outstripped supply.

The route was open for unscrupulous manufacturers to move in and win contracts right and left, secure in the knowledge that the emergency situation would make purchasing authorities less vigilant.

So it was, as De Tijd’s investigative reporter Lars Bové reveals this morning, that sellers stopped at nothing to move unsuitable masks to importers and intermediaries in Europe and elsewhere, relying on the arrival in the market of buyers who were perhaps lacking in experience in what had suddenly become a lucrative market.

Not all of the Chinese masks that flooded the new market were fake. The paper found one manufacturer, Henan Yubei Sanitary Materials Co. Ltd, established in Henan province since 1998.
“For the sake of humanity, we offer a price that is very cheap,” the company told its potential customers. “My masks all meet the standards, and the quality will exceed your imagination.”

In the rest of the world, where the production of PPE is a specialist industry, buyers and importers were convinced. But the Henan Yubei masks were below standard, whatever the company claimed.

For example, the FFP-1 mask the company produced – for use only by hospital staff – offered a 67% filter protection, whereas the legal minimum in Europe is 80%. The masks were also found to offer inadequate closure around the face.

Other masks were found to carry certification which was falsified. In one case, packaging carried the EU’s approval logo, which had simply been stencilled on. However the company producing the fakes had omitted to leave off the mention “this not a CE-mark, for informational purposes only”.

The paper also reveals that the federal economy ministry in Belgium sent no fewer than 16 warnings about Chinese masks that presented a possible health risk to the European warning system RAPEX.

The number is illustrative, considering that all 26 other member states of the EU together submitted only 41 alarm reports in the time period.