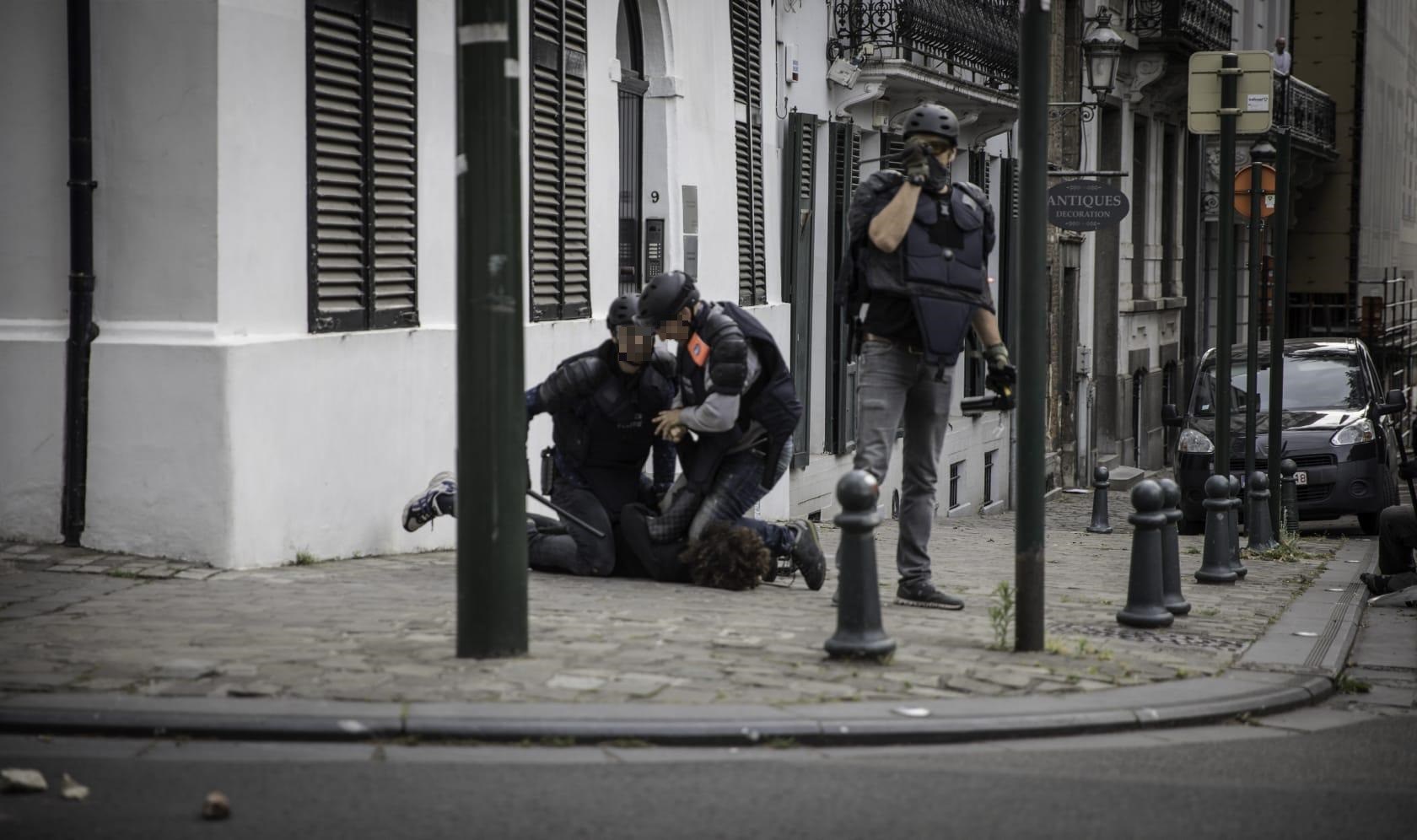 Bystanders urged the police officer to let go of the teenager who was screaming in pain as he was pinned down for several minutes. Credit: Jonathan del Valle / TBT

Witnesses to an arrest in Brussels said they were “shocked” to see an officer kneel on top of a teenager for minutes, saying the gesture mimicked the one used by the US policeman who killed George Floyd.

Photos of the arrest on Sunday show two police officers in riot gear pinning a teen to the ground, with bystanders saying one was kneeling on the back of his neck and twisting his arm.

Speaking to The Brussels Times, three witnesses described police’s use of force as excessive, with one saying that the teenager was crying out in pain and that he was arrested for an unclear reason.

“It lasted almost five minutes,” Igor Pliner, a photographer who captured the arrest said in a phone interview. “I think he was in pain, he was screaming and his arm was completely twisted.” Shocked bystanders stated that the teenager was not resisting and appeared to be arrested for “no clear reason”. Credit: Jonathan del Valle / TBT

The incident took place amid clashes between police and around a dozen protesters in the aftermath of a massive Black Lives Matter protest against police brutality.

Pliner said that he was “shocked” to witness the arrest, adding that the officers outnumbered demonstrators and describing police’s acts as “quite brutal.”

“It was really the same position as that of the police officer who killed George Floyd — exactly the same one,” Aras, a 28-year-old said, adding that when he got to the scene, the policeman was still kneeling on the teen.

A spokesperson with the Brussels-Ixelles police zone, deployed by the mayor to contain the looting and rioting that erupted after the protest, declined to comment but said that the “specific techniques used by police depended on the circumstances.”

“There are too many factors to consider before being able to say what is and isn’t permitted,” the spokesperson said.

Aras, who declined to give his last name, said he attempted to speak to the police officers when he noticed that the teen was not resisting the arrest, but that his pleas were ignored.

“He was not resisting, he was really just lying on the floor, it looked as though they could have just picked him up and put him on the van,” he said, adding that the teen was quite slim and could not have been older than 20.

All three witnesses said they did not understand the reasons for the arrest, saying that it was unclear if the teen was part of some dozen other youths who were using loose stones to block a water cannon. Jonathan del Valle, who also took photos of the arrest, said that he saw the teen riding a bike as police began moving in on demonstrators and that, moments later, the officer was kneeling on the back of his neck.

At least one other person was arrested at the scene, whom Aras identified as a man onboard an electric scooter who was attempting to speak to the officers arresting the teen.

Aras said that officers pushed the man off the scooter and took him into custody for “no reason.”

The incident comes as testimonies and footage emerge of officers of the Brussels-Ixelles police zone intimidating or assaulting citizens and journalists covering the riots.

The police are investigating the filmed testimony of a 19-year-old who said he was beaten up and insulted by five masked officers after attending the protest, and several other people have spoken about being unjustly arrested, including a woman who said she was held in custody for six hours without being told why.