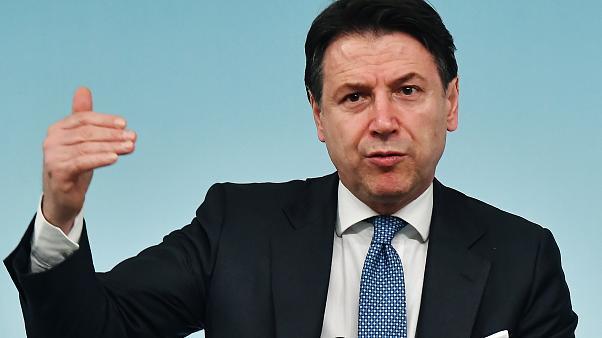 Italy has outlined plans to ease the strict restrictions it imposed seven weeks ago to curb the spread of the coronavirus.

Prime Minister Giuseppe Conte said the measures would be relaxed from 4 May, with people being allowed to visit their relatives in small numbers.

Parks, factories and building sites will reopen, but schools will not restart classes until September.

It comes as the country recorded its lowest daily death toll in weeks.

There were 260 new virus-related deaths on Sunday, the lowest daily figure since 14 March. The total is now at 26,644, Europe’s highest official toll.

Italy has confirmed 197,675 cases of the virus, according to data from Johns Hopkins University, which is tracking the disease globally.

Other countries like Switzerland and Spain are also relaxing their measures.

The number of cases in Italy has been falling, and authorities now believe the contagion rate – the amount of people each person with the virus infects – is low enough to justify a cautious easing of curbs.

What has been announced?

Speaking on television, Mr Conte outlined how the country would begin “Phase Two” of lifting its coronavirus lockdown. The measures include:

Funerals are set to resume, but with a maximum of 15 people attending, and ideally to be carried out outdoors

Individual athletes can resume training, and people can do sports not only in the vicinity of their homes but in wider areas

READ  A second lockdown would be ‘a bloodbath’ warns employers’ federation

Hairdressers, beauty salons, bars and restaurants are expected to reopen for dine-in service from 1 June

There was no announcement on the possibility of Italy’s premier football league Serie A resuming, even behind closed doors.

Mr Conte stressed that social distancing measures would need to continue for months to come, and said church services would remain banned. He urged people to stay a metre (3ft) away from each other.

“If we do not respect the precautions the curve will go up, the deaths will increase, and we will have irreversible damage to our economy,” the prime minister said. “If you love Italy, keep your distance.”

He also said his government would cap the price of face masks at 50 cents.

What is the background?

Italians have been living under a national stay-at-home order since 9 March, with everyone required to remain within a few streets of their door.

The country brought in very limited easing of its virus control measures on 14 April , permitting some small shops – including bookstores, dry cleaners and stationers – to reopen. The businesses chosen were deemed to be lower risk as they rarely attract crowds.

This is a roadmap to reopening for a country that has endured hell, but it could take years for it to recover, the BBC’s Mark Lowen in Rome reports.

If infections show an increase again, the government will have powers to intervene to reintroduce certain restrictions, our correspondent adds.

What is happening elsewhere?

more than five weeks on Sunday, with 288 new fatalities. On Sunday, children could go outside for the first time in six weeks.

In Switzerland , garden centres and hairdressers will open their doors on Monday, followed by schools and shops selling items other than food in two weeks’ time.

But gatherings of more than five people remain banned until 8 June, and it is unclear when bars and restaurants will be allowed to reopen.

In neighbouring Germany , facemasks have become mandatory in public transport. The new rules have created huge demand for the product and, as a result, a growing shortage, so the government is planning to manufacture millions of masks in Germany.

Meanwhile, UK Prime Minister Boris Johnson returns to work on Monday , after recovering from the virus. Mr Johnson spent a week in hospital, including three nights in intensive care, after being admitted on 5 April.

In the US, where more than 54,000 deaths and over 940,000 cases have been confirmed, Tennessee, Colorado and Montana joined four other states in allowing certain businesses to reopen .

On Sunday for the second day in a row, the White House did not host a coronavirus briefing. And, in a series of tweets, President Donald Trump claimed he was being misrepresented by the media and not given credit for his work.

The president was heavily criticised after suggesting at Thursday’s briefing that disinfectant could potentially be used as a treatment for the virus. He later said he was being sarcastic.