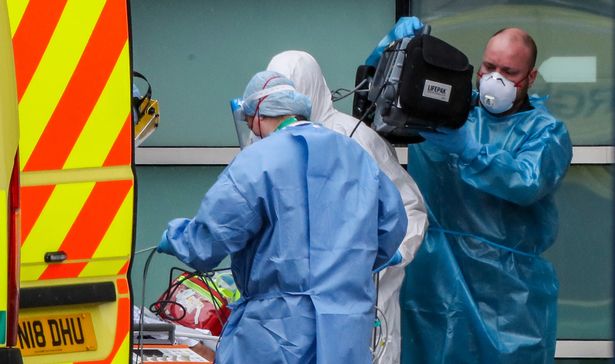 Britain’s coronavirus death toll has soared to 15,538 after almost 900 more hospital fatalities were reported in 24 hours.

The UK is one of just five countries with more than 15,000 deaths, joining the US, Italy, Spain and France amid signs that the curve is flattening.

Another 885 people have died in the UK, according to new daily totals released individually by England (784), Scotland (56), Wales (28) and Northern Ireland (17) on Saturday afternoon.

The UK total previously stood at 14,653 at the same time on Friday.

In England, the latest patients to die were aged between 26 and 100. Of those, 38 (aged between 44 and 96) had no known underlying health condition.

The latest increase came amid fresh hopes that a vaccine could be available by September and as ministers are said to disagree over whether to begin lifting the lockdown in May or extend it until the summer.

The Department of Health released its updated toll on Saturday afternoon, saying 15,464 patients have died in hospital as of 5pm on Friday.

The Department of Health said, as of 9am on Saturday, that 114,217 people have tested positive, up 5,526 from the same time on Friday.

There is a lag in data reported by the Department of Health. Its total doesn’t include new deaths that UK nations have reported individually since 5pm on Friday.

Overall, 460,437 tests have concluded, with 21,389 tests on Friday, excluding data from Northern Ireland.

The death toll does not include fatalities in private homes, hospices or care homes, where as many as 7,500 people are feared to have died during the outbreak.

NHS England has announced 784 new deaths of people who tested positive for Covid-19, bringing the total number of confirmed reported deaths in hospitals in England to 13,918.

Of the 784 new deaths announced on Saturday:

The figures also show 187 of the deaths took place between April 1 and April 14, and the remaining 26 deaths occurred in March, with the earliest new death taking place on March 14.

NHS England releases updated figures each day showing the dates of every coronavirus-related death in hospitals in England, often including previously uncounted deaths that took place several days or even weeks ago.

This is because of the time it takes for deaths to be confirmed as testing positive for Covid-19, for post-mortem examinations to be processed, and for data from the tests to be validated.

The figures published on Saturday by NHS England show April 8 currently has the highest total for the most hospital deaths occurring on a single day – 799 – although this could change in future updates.

A total of 893 people who tested positive for coronavirus in Scotland have died, a rise of 56 on Friday’s figure, according to the Scottish Government.

As of Friday night, 1,793 patients were in hospital with either confirmed or suspected coronavirus, a decrease of six.

Of those, 182 were being treated in intensive care units, down seven from the previous night.

Public Health Wales has announced 28 new deaths of people who tested positive for Covid-19, bringing the total number of confirmed fatalities in Wales to 534.

The new deaths, by health board area, are:

Fatalities rise to 193 in Northern Ireland

A further 17 people in Northern Ireland have died in hospital settings with coronavirus in the past day, the Public Health Agency said.

This brings the total number of confirmed deaths in hospital settings in the region to 193.

The PHA said another 148 people were diagnosed with Covid-19 in Northern Ireland.

It brings the total number of people diagnosed with coronavirus to 2,486.

Experts have said lockdowns shouldn’t be fully lifted until a vaccine is ready for widespread use, although that could be many months away.

Professor Sir John Bell, a member of the Government’s vaccine task force and adviser on life sciences, said human testing of a vaccine is due to begin within the next week at Oxford University.

Trials could be completed by mid-August, he said, amid hopes that a vaccine could be available the following month.

Sir John told BBC Radio 4’s Today programme: “The real question is will it have efficacy?

“Will it protect people, and that has not been tested and it will only be tested once you have vaccinated a significant number of people and exposed them to the virus and counted how many people have got the virus in that population.

“So, we won’t even get a signal for that until May.

“But if things go on course and it does have efficacy, then I think it is reasonable to think that they would be able to complete their trial by mid-August.”

He added: “If we can see evidence of a strong immune response by the middle or the end of May, then I think the game is on.

“Then, of course, there is the massive issue of how you manufacture at scale many billions of doses.”

The comments came amid fears that some hospitals could run out of certain types of personal protective equipment (PPE) this weekend.

Doctors and nurses in England have been asked to work without full-length gowns and to reuse items when treating coronavirus patients ahead of expected shortages of protective garments, prompting outrage from unions.

Chris Hopson, chairman of NHS Providers, said some trusts will run out of supplies on Saturday or Sunday because we have “reached the point where national stock of fully fluid repellent gowns and coveralls (is) exhausted”.

The comments came as a British Medical Association (BMA) survey of more than 6,000 doctors across the country said a significant amount of them remain without the protection they need to guard against Covid-19.

It echoed another survey of 14,000 medical staff by the Royal College of Nursing (RCN) which found half of nurses have felt pressure to work without appropriate protective equipment during the crisis.

At least 50 NHS workers have now died after contracting coronavirus.

There’s thought to be some disagreement in the Cabinet over whether lockdown restrictions should be lifted on May 8 or whether they should remain in place into June.

It comes amid fears for the economy and workers.

It’s believed some ministers are unhappy that there has not been a proper debate about the options, the Daily Mail reported.

Senior Tories have warned that ministers are underestimating the public by refusing to discuss exit strategies for ending the lockdown.

Former Brexit secretary David Davis said: “Other countries have been very open about what they’ve done.

“There’s really no reason, there’s no argument for not debating and discussing with all the facts available.

“There are lots and lots of benefits of being open about this. The argument that was put, that we don’t want to confuse the message, I think is just wrong. It underestimates the public. The public understand that there are phases to this.”

In other developments, the Queen’s birthday will not be marked by gun salutes in what is believed to be a first due to the coronavirus crisis.

The monarch turns 94 on Tuesday but she is said to have decided gun salutes would not be “appropriate” at this time.

A team of researchers is to examine the response of the Chinese Government to the coronavirus outbreak.

Led by Professor Jane Duckett of Glasgow University, the team will assess the measures put in place in China to combat the virus, which originated in the city of Wuhan.

About half of them are in Europe.

Captain Tom Moore had a No 1 song as his NHS fundraiser hit £22million.

The 99-year-old World War II veteran pledged to walk 100 laps of his garden when he launched the fundraiser and he has vowed to keep going after reaching his goal.