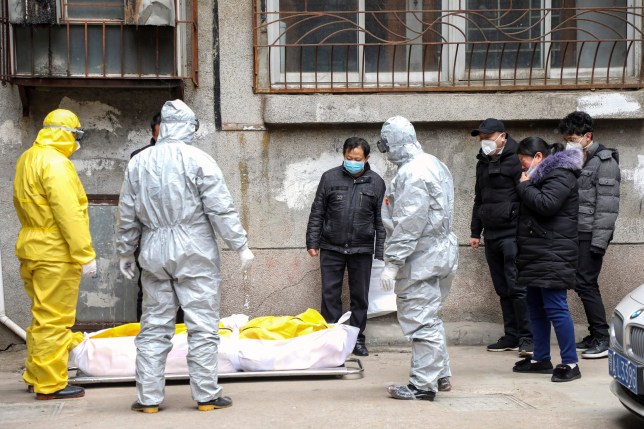 The Chinese city where the coronavirus outbreak began has revised its death toll up by 50%.

Amid continuing scepticism around Chinese data on Covid-19, Wuhan raised its official number of fatalities by 1,290 – with state media suggesting that the undercount was due to insufficient admission capabilities at overwhelmed medical facilities.

It blamed a few medical institutions and overloaded hospitals.

The official Xinhua News Agency quoted an unidentified official in Wuhan’s epidemic and prevention and control headquarters as saying mistaken reporting occurred during the outbreak.

They explained: ‘due to the insufficiency in admission and treatment capability, a few medical institutions failed to connect with the disease prevention and control system in time, while hospitals were overloaded and medics were overwhelmed with patients.

‘As a result, belated, missed and mistaken reporting occurred.’

It comes after major scepticism about China’s reporting of case numbers, with questions repeatedly being raised from various organisations in different nations about the reliability of the country’s data.

Wuhan in particular has faced heavy scrutiny, after it went several days in January without reporting new cases or deaths.

That has led to accusations that Chinese officials were seeking to downplay the seriousness of the outbreak and wasting opportunities to quickly bring it under control. China has denied covering up cases.

The new figures were compiled through a comparison of data from Wuhan’s epidemic prevention and control big data system, the city’s funeral service system, the municipal hospital authority’s information system, and the nucleic acid test system to ‘remove double-counted cases and fill in missed cases,’ the official was quoted as saying.

They explained that new death cases were added because non-hospitalized deaths had not been registered at the disease control information system and some confirmed cases had been reported late or not been reported at all by some medical institutions.

The city, in the central Hubei province, is believed to have seen its first cases in December last year, with the a seafood market widely suggested to be the source of the outbreak. Others have claimed it may have originated in a nearby laboratory.

The city lifted its travel ban on April 8, after a 76-day lockdown. On Tuesday, USA President Donald Trump cut funding to the World Health Organisation, after accusing the organisation of helping China to ‘cover up’ the spread of the virus.