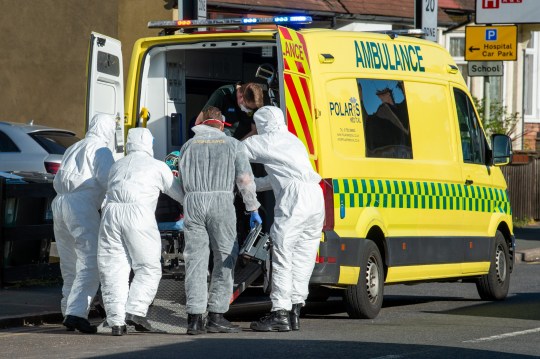 Another 621 people have died after contracting coronavirus, taking the UK death toll to 4,934.

Today’s jump in deaths is one of the biggest daily increase since the outbreak began, following another massive rise of 708 deaths yesterday.

It took 17 days for the number in the UK to pass 200, and has taken a further 15 days to nearly pass 5,000. The toll was updated by the Department of Health after England recorded another 555 deaths.

The patients that died in England were all aged between 33 and 103-years-oldy, the NHS said. The health service also confirmed that 29 of the 555 had no known underlying health conditions.

A total of 47,806 people have now tested positive for coronavirus.

A week ago, on March 29, the total was 19,522. The latest figures emerged as the Health Secretary warned all outdoor exercise could be completely banned if people continue to flout social distancing rules.

Matt Hancock said sunbathing in public spaces was against the Government guidance, and told those who dared to disobey that they are putting their own and others’ lives at risk.

As temperatures rose across the country, some parks closed because too many people had ignored the advice to stay at home.

Mr Hancock told the BBC: ‘We’ve said it’s OK to go for exercise because both the physical and mental health benefits of getting some exercise are really important.

‘I don’t want to have to take away exercise as a reason to leave home… if too many people are not following the rules.

‘At the moment the vast majority of people are (following the guidance) but people should not break the rules because that will mean that the virus spreads more and then we might have to take further action.’

He also confirmed that Boris Johnson continues to have a high temperature but is ‘OK’ and in ‘good spirits’ as he remains in self-isolation in Downing Street.

His warning came ahead of the Queen’s address to the nation, in which she will urge the country to prove that this generation is ‘as strong as any’.

In a televised message to be broadcast on Sunday evening, the head of state will recognise the pain felt by many families living through this ‘time of disruption’.

She will personally thank frontline NHS staff, care workers and others carrying out essential roles for their efforts, in what is expected to be a deeply personal message reflecting her experience in other difficult times.