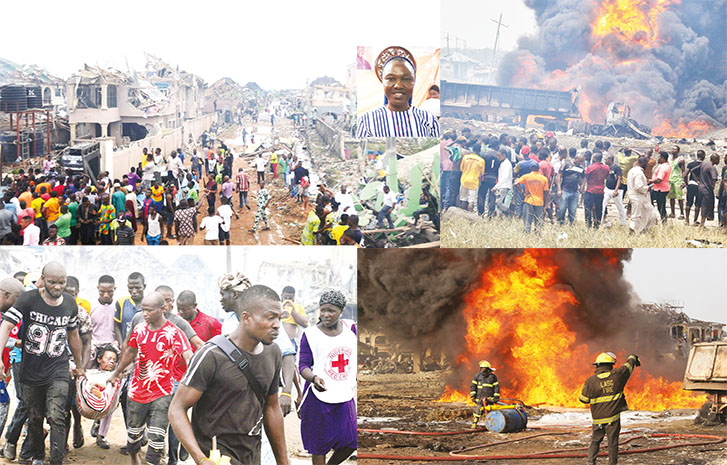 About 25 persons were believed to have died and over 70 houses de­stroyed in the gas explosion which oc­curred in the Abule Ado area of Lagos on Sunday.Several vehicles were also destroyed.

The Nigerian National Petroleum Corporation (NNPC) said the incident was due to a gas explosion which occurred after a truck hit some gas cylin­ders stacked in a gas pro­cessing plant located near the corporation’s system 2B pipeline right of way.

The corporation’s Group General Manager, Group Pub­lic Affairs Division, Dr. Ken­nie Obateru, in a statement, explained that preliminary findings indicated that the im­pact of the explosion was so huge that it led to the collapse of nearby houses and damage to the NNPC pipeline, and that efforts were being made to curtail the resultant fire.

Obateru stated that follow­ing the report of the explo­sion, the corporation quickly halted ongoing pumping oper­ations on the Atlas Cove-Mosi­mi pipeline which was active at the time.

The statement explained that the NNPC had already mobilised its in-house com­bined team consisting of health safety environment experts, medical and security personnel from its nearby sat­ellite depot in Lagos, even as the Lagos State Fire Service was also rallied to extinguish the fire.

The statement said more firefighting personnel and equipment were mobilised from the NNPC Mosimi area office to provide extra fillip to the ongoing operation.

Assuring members of the public and residents of the affected communities to remain calm, the NNPC’s spokesman assured that the temporary shutdown of the petroleum products pipeline would not affect the normal supply of products to Lagos and environs.

He said the fire, currently burning at controlled condi­tion, was being fought head­long, adding that a detailed assessment of the incident was underway to establish the extent of damage to the pipeline.

The NNPC Group Man­aging Director, Mallam Mele Kyari, commiserated with the victims of the incident, pray­ing that God provide them succour at this hour.

Meanwhile, the National Emergency Management Agency (NEMA) said no fewer than 15 residents died, while over 50 buildings were destroyed in the explosion.

However, eyewitnesses said they counted more than 25 dead bodies and over 70 houses that were destroyed by the explosion.

Ibrahim Farinloye, Acting Coordinator of the Lagos Ter­ritorial Office of NEMA, who confirmed the development to newsmen, said the resulting fire from the explosion later spread to the NNPC oil pipe­line passing through the area, although the pipeline had been shut down as a precau­tionary measure.

He said a combined team of the Lagos State Fire Ser­vice, Federal Fire Service, and the Nigerian Navy Fire Tender were battling to put out the inferno.

The explosion, which oc­curred about 9a.m. on Sun­day, caused panic among La­gos residents after it shook many houses in Ijegun, Fes­tac Town, and other commu­nities in the Amuwo Odofin Local Government Area up to Agege, near Lagos.

The headquarters of the Lagos Province 3 of the Redeemed Church of God (RCCG) located on 24 Road, Festac Town, Lagos, is among over 50 buildings affected by the explosion.

The explosion, which oc­curred more than a kilometre away from the church prem­ises, shattered its glass win­dows, injuring worshippers.

A parish of the First Bap­tist Church, near the RCCG parish, also lost a part of its roof to the explosion.

The roof of a parish of the Living Faith Church (Win­ners Chapel) located at 7th Avenue, Festac Town, was also blown off by the explo­sion which equally shattered the roof of the Ark Parish of the RCCG at 1st Avenue, many kilometres away from the ex­plosion scene.

The Bethel Secondary School, a boarding school owned by the Catholic Church in Abule Ado, was brought down by the explosion.

Many other buildings very far from the scene of the ex­plosion in Abule Ado, Festac Extension, in Amuwo Odofin LGA, were also brought down while many others shook during the explosion that threw thousands of residents in panic and confusion.

The Odic Plaza, a motor parts mall and warehouse, Bush Bar Hotel, Green Horse Plaza which houses tyres, Arch Angel Catholic Church, Chino Plaza with many goods in it, and a mechanic village, all located inside the Trade Fair Complex, Ojo, were all hit by the explosion.

A witness, Mrs. Patience Erebogaya, said she was preparing to go to work in a nearby hotel when the Bethel School was shattered by the explosion and injured her.

The victim said Mass cel­ebration was going on in the Catholic school when the ex­plosion reduced the school to rubbles, trapping many students.

One of the victims of the incident, Mr. Abayomi Abeyi, said his building was severe­ly damaged while his wife sustained injuries from the explosion.

Abeyi, who is the chair­man, National Union of Road Transport Workers, Mile 2, Amuwo Odofin branch, ap­pealed to the Lagos State gov­ernment to come to the aid of the victims of the unfortunate incident.

Vehicles were seen with crashed windscreens and dents from the explosion.

Many residents who had gone to church could not go back home while others didn’t have any home to go back to.

On his part, Dr. Olufemi Oke-Osayintolu, Director General, Lagos State Emer­gency Management Agency (LASEMA), said the govern­ment would carry out a thor­ough investigation to unravel the cause of the explosion.

“Our advice to people is that there is no need to panic. We are on top of the situation and the fire has been put out through collaboration by the various agencies.

“We can neither smell gas nor petrol, we can’t really say this is what led to the fire.

“We are still waiting for the outcome of the result to know the cause of the fire outbreak,” Oke-Osanyintolu said.

In the meantime, President Muhammadu Buhari has commiserated with families who lost loved ones, and all those affected by the explo­sion.

The president in a state­ment by Garba Shehu, his media aide, on Sunday, also condoled the Lagos State government and all resi­dents affected by the unfor­tunate incident, which left many injured and property destroyed.

President Buhari said: “I have received with sadness the news of this unfortunate incident which caused loss of lives and property.

“A misfortune of whatev­er scale anywhere is a trage­dy to the country, and while the NNPC makes efforts to determine the cause of the incident, I send my deepest and profound sympathy to the victims, their families, government and people of Lagos State.”

Similarly, President of the Senate, Ahmad Lawan, has commiserated with victims of the explosion that occurred on Sunday morning at Abule Ado, Amuwo Odofin Local Govern­ment Area of Lagos State.

Lawan in a statement by His Special Adviser on Me­dia, Ola Awoniyi, on Sunday condoled with all those who lost loved ones in the incident.

He also sympathised with those who were injured and those who lost property to the inferno.

The Senate president com­miserated with the Lagos State government over the tragic incident and prayed to God to comfort all those who were affected.

Lawan called on the rele­vant authorities and agencies to get to the root of the inci­dent with a view to forestall­ing a recurrence.