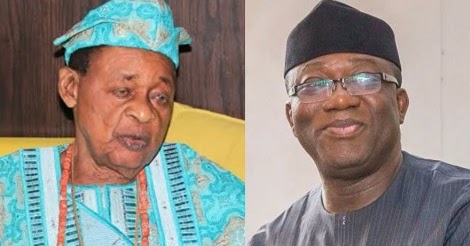 Following the sanction of sixteen monarchs by the Ekiti state government, Governor Kayode Fayemi has called for a meeting with major stakeholders, POLITICS NIGERIA can authoritatively report.

The meeting, which was scheduled for Monday, will be attended by group leaders and paramount Yoruba rulers including the Ooni of Ife, Oba Ogunwusi Enitan, representatives of the Afenifere group and the embattled Ekiti monarchs.

POLITICS NIGERIA earlier reported how Mr Fayemi issued a query to the monarchs over their absence at a meeting of the Council of Obas and Chiefs.

Also, this paper reported the intervention of Alaafin of Oyo, Oba Lamidi Adeyemi, who wrote Mr Fayemi, advising that he tread softly and treat the traditional institutions with respect.

The foremost traditional ruler, who wrote on behalf of other royal fathers in Yoruba Land, condemned the composition of Council of Obas and Chiefs in the state.

“Your Excellency’s neglect of the hierarchical order by appointing a subordinate Oba as the Chairman of the Council of Obas and Chiefs in the State over and above the recognized order It was therefore with total displeasure and indeed total discomfort that we learnt of,” a copy of the letter obtained by POLITICS NIGERIA read.

It should be noted that the composition of the council has been contested in court by the aggrieved monarchs. Alaafin also urged Mr Fayemi to await the court’s verdict before taking any action.

Meanwhile, when our correspondent reached out to the spokesperson of Afenifere, Yinka Odumakin, he announced that a meeting between the state government and the traditional rulers will hold on Monday and promised to make the stance of the socio-cultural group known after the meeting.

“When I spoke with the Governor yesterday, he told me that there would be a meeting of the traditional rulers on Monday. We will release our stance after the meeting,” He told this newspaper on Saturday.

Nevertheless, the spokesperson of Mr Fayemi, Yinka Oyebode, declined comments when POLITICS NIGERIA requested his reactions to the letter on Saturday morning.

“I cannot comment on a social media letter. From my knowledge of administration, if a letter is written to the Governor or Presidency, it is delivered to the registrar and the submitted to the appropriate quarters.”

When asked if the letter is not original or yet to be received by the Governor, he responded; “I’m not saying it is fake but I prefer seeing the hardcopy of the letter. Moreover, I don’t think I want to talk about the matter since it is in court.”