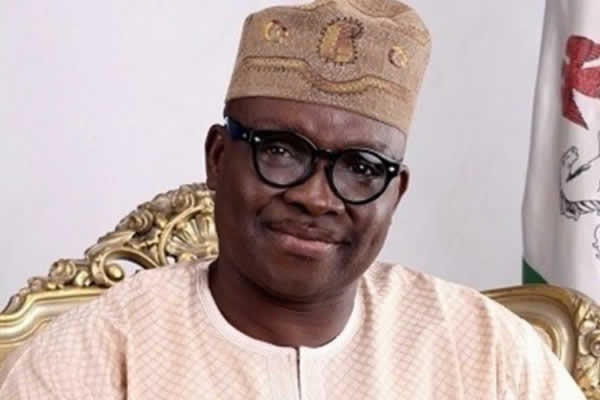 The N2.2bn fraud trial of former Ekiti State Governor Ayodele Fayose resumed on Thursday with a banker, Johnson Abidakun, narrating to the court how Fayose in April 2016 invited his bank to move N200m cash from his residence for lodgment in an account in the bank.

Abidakun told Justice C.J. Aneke that he was the Head of Operations at the Ado Ekiti branch of Zenith Bank, adding that his duty was to oversee three units, namely: Funds Transfer; Cash and Teller; and Customer Service.

The banker, who was led in evidence by a member of the prosecuting team for the Economic and Financial Crimes Commission, Adebisi Adeniyi, said the transaction began with a call on April 16, 2016, from his Zonal Head, Dr Abiodun Oshode, instructing him of the need to move N200m cash from Fayose’s residence down to the bank.

Abidakun said, “I received a call from my Zonal Head, Dr Abiodun Oshode, that there was an assignment to be carried out; that there was a sum of N200m to be moved from the residence of the then governor, Mr Ayodele Fayose; that we had to go and move the cash urgently and I immediately called upon the cash officer to arrange for policemen. The policemen arrived after 30 minutes. We arranged for their payment and called it police money. We also arranged for the cash driver and the cash movers.

“So, they set out for the assignment. After about one hour, they came back with the money and the money was counted and ascertained to be N199.5m as against N200m. While detailed counting of the money was going on, Mr Abiodun Agbele came in with one other man, Mr Taofeek.

“I know Mr Abiodun Agbele to be close to the governor but I don’t know his position; he gave instructions that the money should be credited into the account of Still Earth Nigeria Limited and that the depositor was Mr Taofeek.

“At the point of posting, I discovered that the deposit slip was filled by my subordinate, Oputu Okeimute. I asked him why he filled the deposit slip and he said the depositor could not read or write. After that, the money was credited into the account of Still Earth.”

Under cross-examination by Fayose’s lawyer, Ola Olanipekun (SAN), Abidakun affirmed that he did not personally go to Fayose’s house but delegated Adewale Aladegbola to lead the team.

“Aladegbola was the only one that knew the destination. I didn’t tell him the amount of money but he led the team.

“When they came back, they didn’t tell me that they met the first defendant (Fayose),” the witness added.

In the charges, the EFCC alleged, among other things, that Fayose, on June 17, 2014, “took possession of the sum of N1, 219, 000,000 to fund your 2014 gubernatorial campaign in Ekiti State, which you reasonably ought to have known formed part of the proceeds of an unlawful act, to wit: criminal breach of trust/stealing.”

The ex-governor was also alleged to have on the same day “received a cash payment of $5,000,000 from Senator Musiliu Obanikoro, the then Minister of State for Defence, which sum exceeded the amount authorised by law and you thereby committed an offence contrary to sections 1 and 16(d) of the Money Laundering (Prohibition) Act, 2011 (as amended) and punishable under Section 16 (2)(b) of the same Act.”