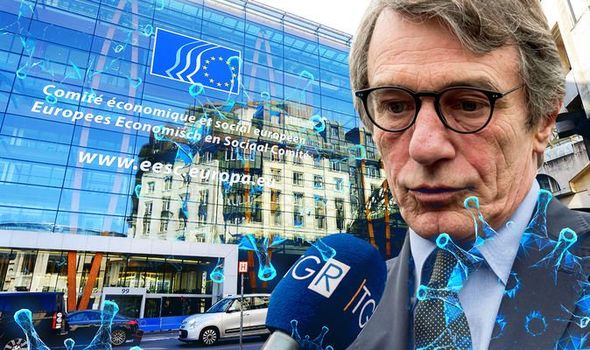 THE European Parliament has taken emergency action in a desperate bid to avoid being caught up in the global coronavirus outbreak.

Tens of thousands of visitors will be told to steer clear of the institution’s homes in Brussels and Strasbourg for the next three weeks. Over 100 seminars, events and other activities involving tourists and external visitors have been cancelled as part of the effort. The plans were announced by David Sassoli, the EU Parliament’s president, at a news conference last night.

He warned officials must adopt tougher rules to cut the risk of a coronavirus outbreak with some 700,000 people visiting the EU assembly’s buildings each year.

But the Italian chief decided not to cancel any parliamentary activity with next week’s plenary session in Strasbourg set to go-ahead.

He said: “We will limit the access of visitors to the Parliament. This measure derives from the fact that we are a very open institution by nature with 700,000 visitors per year.

“Under the current circumstances, it is our responsibility to suspend these visits. In the same spirit, we will cancel 130 events such as exhibitions or external conferences planned for the next weeks on Parliament premises.”

He added: “We have a duty, which is that the Parliament must continue its legislative activity, and we want this to happen.

“The plenary will unfold properly.”

Opponents of the EU Parliament’s two-seat system used the opportunity to further their cause to scrap sessions in Strasbourg.

In an email to the President, seen by Express.co.uk, Irish MEP Mick Wallace wrote: I do think that panic’ is unhelpful when it comes to dealing with the challenges of the coronavirus but we should learn lessons from the Chinese who seem to have garnered some control over the spread of the virus by restricting movement and the use of isolation.

“On that note, I believe that it does not make sense for all the MEPs and staff to travel by train, bus, aeroplane or car to Strasbourg next week – I think you should organise for next week’s plenary to be held in Brussels instead.”

Finnish MEP Teuvo Hakkarainen added: “I agree with this proposal. We should not be the ones spreading the virus further.

“As we all know, the elderly are more vulnerable to the disease, with a much higher mortality rate for those infected.

“Let us hope that this House – for once – makes a wise decision.”

Last week EU Parliament officials were told to self-isolate themselves if they have travelled to at-risk areas – including Italy and China – within the last 14 days.

A memo circulated to staff said: “Stay home in self-isolation and do not come to the EP; you are asked to apply for teleworking.

“If your job does not enable you to do teleworking, please could you contact your head of unit by telephone or email to agree possible tasks to do from home.”

The European Centre for Disease Prevention yesterday raised its threat warning level from “moderate to high” as the global death toll passed 3,000.

According to the World Health Organisation’s latest official statistics, a total of 54 deaths and over 2,000 infections across Europe.