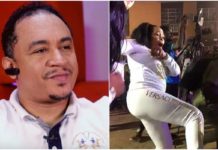 Daddy Freeze has reacted to the online debate about gospel artiste, Tope Alabi’s dance step at her father’s funeral.

Recall that a video of the gospel singer emerged online where she was dancing like a marlian. Watch here

Nigerians who opined that it was worldly to dance like that took to Twitter to criticize the gospel singer.

However, the singer in an interview with TVC yesterday said she was dancing at her father’s funeral and that people with spiritual eyes will understand her.

Reacting to the video, Freeze in a now-deleted post, said he did not see anything wrong with her dance step. However, he added that her dance step was repulsive and uncouth and it made her look like ”two worms that were mating.” Daddy Freeze is a very controversial OAP, who takes joy in attacking Christians and mostly preaches.

Just recently, he took to IG to slam the General Overseer of Redeem Christian of God (RCCG), Pastor Adeboye for praising God that one of the RCCG house fellowship centres in the Abule Egba Axis was untouched by the fire that destroyed houses and properties.

Pastor Adeboye had quoted a passage of the bible about the plague passing over the houses of the Israelites because of the blood of the lamb on their doors. The Israelites were spared but the Egyptians were not.