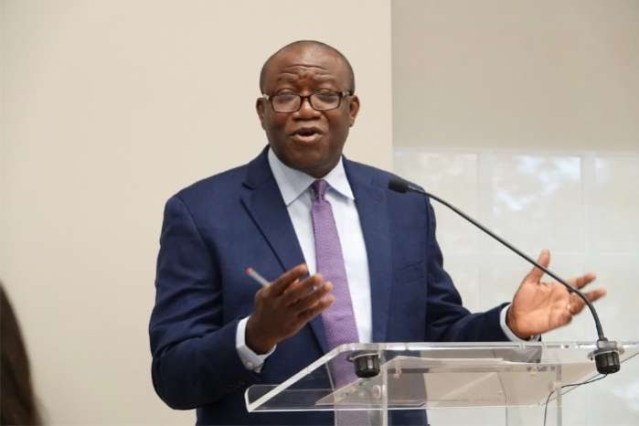 Ekiti State Governor, Dr Kayode Fayemi, has assured that the South-West geopolitical zone has no plans to secede from Nigeria in the heat of the controversy generated by the launch of Western Nigeria Security Network code-named Operation Amotekun.

The Governor gave the assurance, on Monday, when he hosted a pan-Yoruba development interest group, the Oodua Progressive Union (OPU) Worldwide who were led to his office by the Aare Ona Kakanfo of Yorubaland, Iba Gani Adams.

Adams was in Ado Ekiti to attend the Annual World Conference of the OPU which was scheduled for Ekiti State.

Represented by the Deputy Governor, Chief Bisi Egbeyemi, Fayemi said nobody should entertain any fear of secession by the South-West over the launch of Amotekun which he said was meant to protect all Nigerians resident in the region.

He explained that Governors in the South-West decided to establish Amotekun to tackle criminal activities like armed robbery, kidnapping, illegal destruction of lives and property and give assurance of safety to all residents.

He said: “Amotekun is not political, it was established for the protection of our people and stem the tide of armed robbery, kidnapping, illegal destruction of lives and property.

“This is the first time that the region is united on the need to raise a security platform to complement the existing security agencies to protect the lives and property of our people which is our constitutional duty.

“I also want to say that the South-West is not seceding from Nigeria. The South-West zone remains part of Nigeria and it will remain committed to a united and indivisible Nigerian federation.”

Fayemi also commended OPU for promoting the culture of the Yoruba all over the world saying his administration fully supported the sustenance of culture and using it to drive social integration, create jobs and boost tourism.

“We are happy that we have this type of organization during your (Adams’) time because we believe it will cater to the interest of the Yoruba all over the world.

“The Yoruba are all over the world and they are doing fine in many fields of human endeavour. Interest groups like this are needed for them not to forget their culture.”

Speaking earlier, Adams disclosed that OPU was formed in 2011 in Mumbai, India and was set up to organize an annual interface for delegates from all over the world on issues bordering on the sustenance of the Yoruba culture.

Baring his mind on the Amotekun debate, Adams welcomed the agreement reached between the Federal Government and Governors in the South-West on the security network saying,” it is for the progress of the country.”

According to him, “It is necessary for our Governors to have our own security network code-named Amotekun. Life is precious. You don’t politicise the issue of security

“So, I think the initiative of Amotekun by the Southwest Governors, the President should complement it. He should even add it to their books so that the economic nerve of the nation can be safe in terms of life and property.

“We don’t need to continue to throwing missiles at ourselves in the media and anybody who stands as an antagonist to Amotekun, I will perceive that person in two forms.

“One, he has an agenda to destroy our zone or two, he is an agent of criminals. Definitely, the agreement between the Federal Government and Southwest Governors is a welcome development. It is for the progress of the country,”