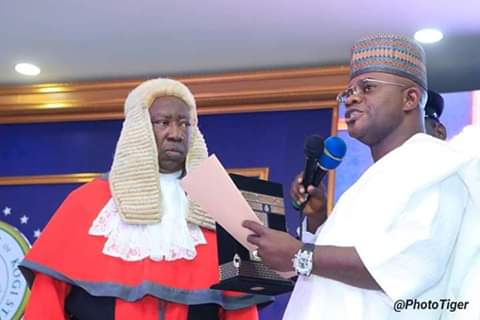 Kogi State Governor, Alh. Yahaya Bello and his Deputy Chief Edward Onoja have been inaugurated for a second term.

The inauguration took place Monday inside the Glass House of Government House, Lokoja.

State Chief Judge, Justice Nasir Ajanah administered the oat of office on the Bello and Onoja in a ceremony that was on live television. Dignitaries at the ceremony include the All Progressives Congress, APC, National Chairman Com Adams Oshiomhole, Ekiti State Governor Dr. Kayode Fayemi and his Kwara State counterpart Governor Abdulrazaq. Others are Governor Rotimi Akeredolu of Ondo State, Governor Godwin Obaseki of Edo State and Prof. Zulum Governor of Borno State. Minister of Youths and Sports Development Hon.Sunday Dare, Minister of Transport Hon. Rotimi Amaechi among others.

Traditional rulers at the ceremony were led by the Attah Igala HRM. Dr. Ameh Oboni II and the Ohinoyi of Ebiraland HRM Ado Ibrahim.

The governor in his address assured people of the State of better days ahead in his second tenure.

He also took the unprecedented step of announcing the names of his commissioner nominees at the event.